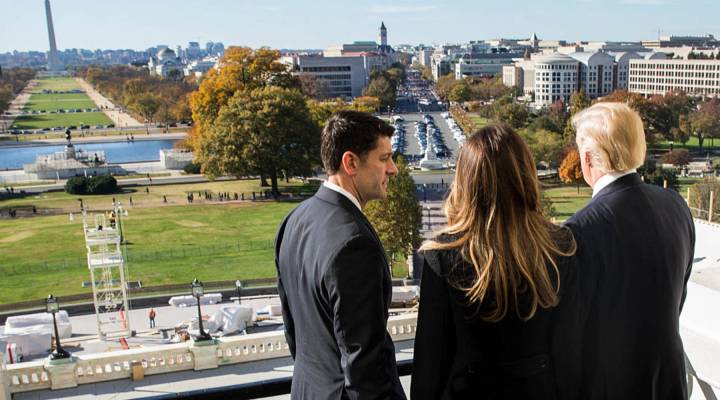 President-elect Donald Trump and Hillary Clinton were on the same page on one issue — infrastructure. But will Trump be able to convince Republican lawmakers to pony up a trillion dollars for his proposed plan? And if he does, how will the country pay for it?

Marketplace’s Washington Bureau Chief Andrea Seabrook says it puts the GOP in a bit of a quandary:

For people like Paul Ryan and the traditional Republican Party that is in place for the House and Senate, this is not just a rhetorical shift. Their entire ideological base, the things they truly believe in, are based on not running up any more debt and deficit and shrinking government and frankly when you cut taxes, no matter how much they would like to do that and how much they believe in this idea that cutting taxes stimulates the economy, you drain the treasury. So how do they do it? I don’t know. I think there’s a very good case to be made that Donald Trump may be more fractious to the Republican Party than any Hillary Clinton or any other Republican candidate would’ve been.

While Trump may have an uphill battle on spending, his hard-stance on trade seems to be working on some level already. Canadian Prime Minister Justin Trudeau says that he is now willing to begin talks to renegotiate NAFTA. But Seabrook says unwinding decades worth of trade negotiation policy isn’t something that can be done with a pen.

Got questions about the election aftermath, Trump’s first 100 days or the future of the American economy over the next four years? Tweet to @kairyssdal or @RadioBabe and we’ll try and answer them.