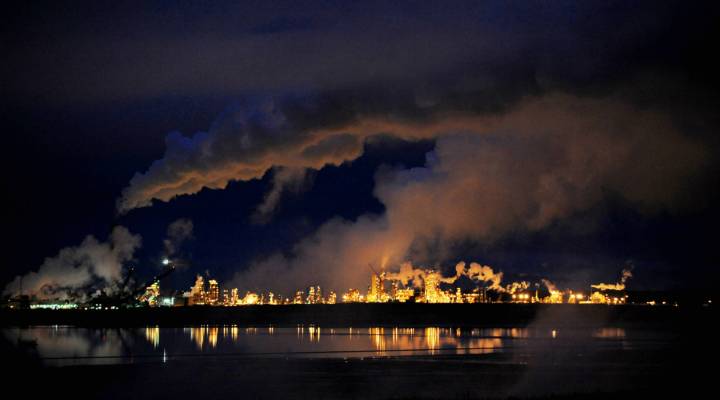 COPY
A night view of the Syncrude oil sands extraction facility near the town of Fort McMurray in Alberta, Canada. MARK RALSTON/AFP/Getty Images

Canadian Prime Minister Justin Trudeau announced this week that Canada will institute a national price on carbon emissions. Doing so would help it reach goals set by the Paris Climate Agreement.

With the goal of reducing carbon emissions by 30 percent from 2005 levels, the plan allows provinces to decide how to reduce their own emissions, either through a carbon tax or a cap-and-trade system. Failure to do so would result in a government-mandated system.

“If neither price nor cap and trade is in place by 2018, the government of Canada will implement a price in that jurisdiction,” Trudeau said to parliament on Monday.

Most of Canada’s population lives in regions already under a carbon price. Some provinces that don’t have voiced strong opposition to the new policy. Experts, however, said most would likely come into compliance.

“I think eventually the folks who are opposed to it will find a way to adapt to the carbon price, but there’s going to be a lot of kicking and screaming,” said Laura Dawson, director of the Canada Institute at the Wilson Center.

Dawson said less wealthy provinces would likely come in line so as not to jeopardize the equalization payments they receive.

“That means a lot of money comes from the central government, out to the provinces for things like health care, education; and so the provinces don’t want to turn off that tap,” she said. “So I think that they’re going to work towards a negotiated solution.

Dawson said Canada could be vulnerable if it gets too far ahead of the U.S. in charging for emissions. Only California and a handful of states in the Northeast have a cap-and-trade system.

“If Canada gets way out in front on climate policies, and the U.S. doesn’t or goes a different direction, Canada could really — sorry the pun — be left out in the cold in terms of its economic competitiveness,” Dawson said.

But even that lack of competitiveness may only be temporary, if the Canadian plan shows limited economic repercussions while pushing emissions reductions, said Andrew Light, a senior fellow at the World Resources Institute.

“I think that eventually, we will see the country move in this direction, and if it does grow jobs, if you see the kind of follow-on effects that are expected positively on the economy following a move like this, then I think that the opposition will diminish,” Light said.

“And obviously, with Canada just to our northern border, I think this will have quite an effect on the potential willingness of many U.S. states to move in that direction as well,” he added.

However, he said the adoption of a carbon price in this country is likely not in the immediate future.

“I don’t think that — moving out of the gate —  that any president should be pushing hard on that in the face of the opposition in Congress,” Light said. “We should work with the policies that we have put in place — right now, the Clean Power Plan, where we regulate through the Clean Air Act.”

There could be more pressure on the U.S. to move toward emissions reductions soon, though. This week, the Paris Climate Agreement could pass the threshold number of countries it needs to go into force. Light said the agreement, which was reached in December, has benefited from wide global support.

“We haven’t seen an agreement enter into force this fast in quite a long time, and it shows an intensive amount of activity to really seriously move on it,” he said.