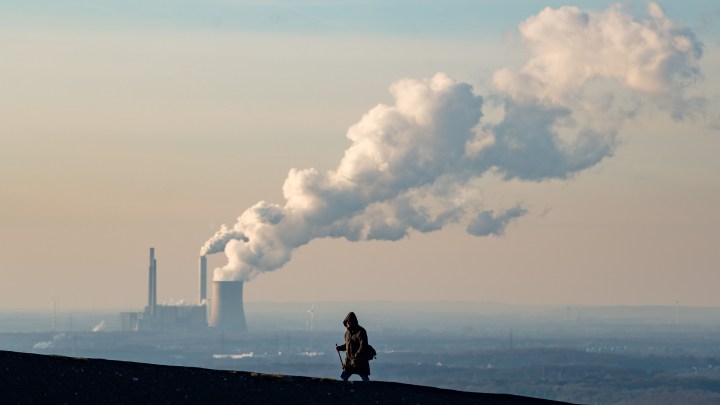 COPY
The EU is encountering pushback against a new plan to use trade policy to reduce carbon emissions in an effort to mitigate climate change. Lukas Schulze via Getty Images

The EU is encountering pushback against a new plan to use trade policy to reduce carbon emissions in an effort to mitigate climate change. Lukas Schulze via Getty Images
Listen Now

Last week’s devastating floods in Western Europe — which claimed at least 188 lives and which some European leaders attributed to climate change — coincided with the launch of a package of radical proposals by the European Union to combat this escalating environmental threat.

Among the proposals is the world’s first carbon border tax, a tariff on imports into the bloc from countries that are not aggressively tackling their own greenhouse gas emissions. The plan has yet to be approved by the governments of the 27 member states and the European Parliament and is not scheduled to be implemented until 2026. But the novel idea of using trade policy to mitigate climate change, though welcomed in some quarters, is proving highly contentious.

The European Commission argues there are pressing economic reasons for a carbon border tax. The EU has already committed to cutting its emissions to 55% of 1990 levels by the end of the decade and to net zero by 2050.

The means of achieving these reductions is to get Europe’s companies to pay for their emissions. The resulting price of carbon has rocketed to just under $60 a ton, presenting them with a dilemma.

“If Europe decarbonizes quickly while others don’t do the same thing, European industry becomes competitively disadvantaged,” said Simone Tagliapietra of the Bruegel think tank in Brussels. “We need a carbon border adjustment mechanism to ensure a level playing field between domestic industry and foreign industry.”

Without it, supporters of the measure fear that not only would European companies be financially disadvantaged, but some might be tempted to relocate outside the EU to a country without carbon restrictions. That would increase the level of global emissions.

The proposed tariff would apply initially to imports of steel, aluminum, cement, fertilizer and electricity from countries that haven’t put a price on carbon. The tariff could help the EU achieve its own emissions cuts, according to Michael Jacobs, an economics professor from Sheffield University in England.

“It will make it much easier to get the support of business and potentially of voters for the measure internally,“ Jacobs said. ”I don’t think you can win support for emission cuts within the EU if there is a risk that you will simply encourage imports from countries that don’t have the same carbon restrictions as the EU.”

Jacobs suggested that a carbon tariff could even spur more international action.

“I suspect it would encourage other countries who wouldn’t want their exports to the EU to be penalized to impose stronger climate policies of their own,” he said.

But the proposal is already aggravating trade tensions. Exporting countries that are likely to be hit by the tariff — China, Russia, Turkey and the North African states — call the measure protectionism. A complaint to the World Trade Organization would be likely and could be difficult for the EU.

“The tariff is tricky to justify from a WTO perspective and to prove that it’s nondiscriminatory,” said Emily Lydgate, a legal expert with the UK Trade Policy Observatory.

“The commission has really tried to craft this in such a way that it passes the test of the WTO, but I’m not sure they’ll succeed,” she said. The commission is claiming that the border adjustment mechanism is necessary to prevent “leakage,” or EU-based companies relocating to countries with no carbon restrictions. “But there isn’t much evidence that leakage is happening, so that’s one potential strategic weakness in the EU’s case,” Lydgate said.

Oddly enough, some environmentalists have attacked the proposed tariff too. Tom Burke of the green energy think tank E3G opposes the proposal on the grounds that it will sour the atmosphere at the critical COP26 Climate Change Conference in Glasgow, Scotland, in the fall.

“This is not the time to be angering the countries that will be affected by this policy, like Russia, China and Turkey,” he said. “I think there is absolutely no benefit in taking the complicated politics of climate change and entangle them with the morass of politics that goes around trade. This will weaken the cooperative impulse that we need to have if Glasgow is going to succeed.”