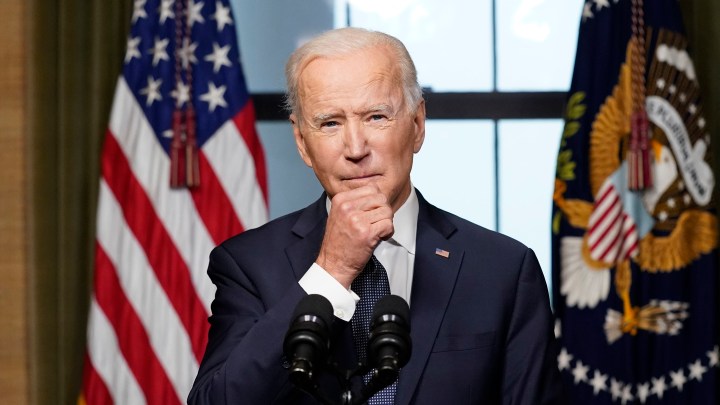 COPY
Biden is pledging to cut U.S. greenhouse gas emissions by at least 50% by the year 2030, using a 2005 baseline. Andrew Harnik/Pool/Getty Images

Biden is pledging to cut U.S. greenhouse gas emissions by at least 50% by the year 2030, using a 2005 baseline. Andrew Harnik/Pool/Getty Images
Listen Now

President Joe Biden is marking Earth Day by kicking off a two-day, virtual climate summit with dozens of world leaders. The White House says Biden is opening the meeting with a big announcement: that the U.S. will cut fossil fuel emissions up to 52% by 2030.

Marketplace’s Nancy Marshall-Genzer has the details. The following is an edited transcript of her conversation with “Marketplace Morning Report” host David Brancaccio.

Nancy Marshall-Genzer: He’s pledging to cut U.S. greenhouse gas emissions by at least 50% by the year 2030, using a 2005 baseline. The White House sent out a fact sheet this morning pledging to make the U.S. power sector 100% carbon pollution-free by 2035, to support efficiency upgrades in buildings and to fund new charging stations for electric vehicles. And the White House repeatedly says that this plan will create well-paying jobs.

President Joe Biden: “I see line workers, laying thousands of miles of transmission lines for a clean, modern, resilient grid. I see workers capping hundreds of thousands of abandoned oil and gas wells that need to be cleaned up and abandoned coal mines that need to be reclaimed. Putting a stop to the methane leaks and protecting the health of our communities.”

Brancaccio: What’s the business community’s reaction to all of this?

Marshall-Genzer: A coalition of more than 400 businesses signed a letter to Biden earlier this month calling for exactly what Biden announced this morning — cutting emissions by at least 50% by 2030. And there were some big names on that letter: Ford and GM signed it along with Apple, Facebook, Google and Microsoft.

Brancaccio: While those focused on climate see this is as necessary, this would be a huge undertaking. Is the country ready?

Marshall-Genzer: Biden will run into lots of opposition. He’ll need congressional support to fund this plan. Republicans say they’ll fight proposals to move the U.S. away from fossil fuels. And some countries, like China, say this could all unravel if Biden isn’t reelected. But the White House says, even under former President Donald Trump, some states and cities, and private companies, committed to emissions reductions on their own.