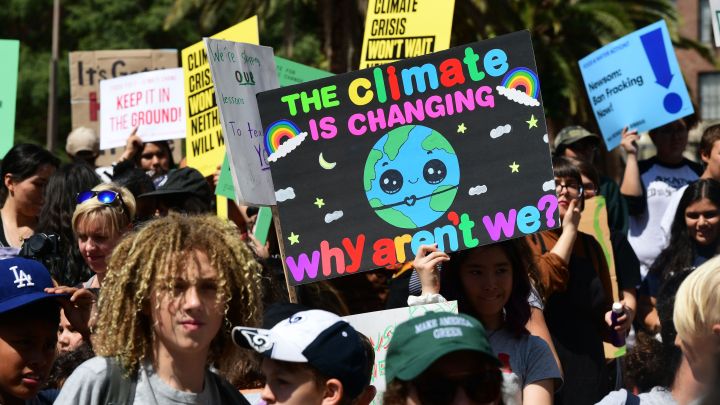 COPY
The Biden administration is arguing that climate change is already a crisis affecting the whole economy, meaning it needs a proportionate response. Frederic J. Brown/AFP via Getty Images

The Biden administration is arguing that climate change is already a crisis affecting the whole economy, meaning it needs a proportionate response. Frederic J. Brown/AFP via Getty Images
Listen Now

President Biden kicked off an international virtual climate summit on Thursday, Earth Day. The president’s big announcement was a pledge to cut America’s greenhouse gas emissions by at least half by 2030, using 2005 levels as a baseline. Part of the Biden-Harris vision for a greener future is a commitment for the “whole of government,” to be involved, not just a few departments.

Treasury Secretary Janet Yellen has said climate action requires a “whole of economy” approach as well. According to Sarah Dougherty of the Natural Resources Defense Council, that makes sense. “If we’re constantly hammered by disasters, it’s really hard to go to work if your place of unemployment is underwater,” Dougherty said. “It’s unlikely that prices remain stable if we just keep having huge disasters that disrupt the supply chain.”

The Biden administration said it plans to work with domestic and international governmental agencies as well as private finance to better factor in climate-related risks, streamline investments and coordinate regulations.

Professor Isabella Alcañiz, who teaches the politics of climate change at the University of Maryland, said the administration has signaled that it is “committed to investing in tax credits, in direct government investment and other tools that the government has at its disposal across economic sectors.”

One of those tools is what and how the government buys. It has a multi-trillion dollar budget, much of it spent on resourcing the military or the massive civilian workforce.

“By using the government’s procurement power to boost demand for new clean energy technologies it can help commercialize them,” said Jason Bordoff, the co-founding dean at Columbia University’s climate school. That will bring down the cost, Bordoff explained, making these technologies “more affordable and accessible to everyone else” –– providing all of government, including Congress, gets on board.