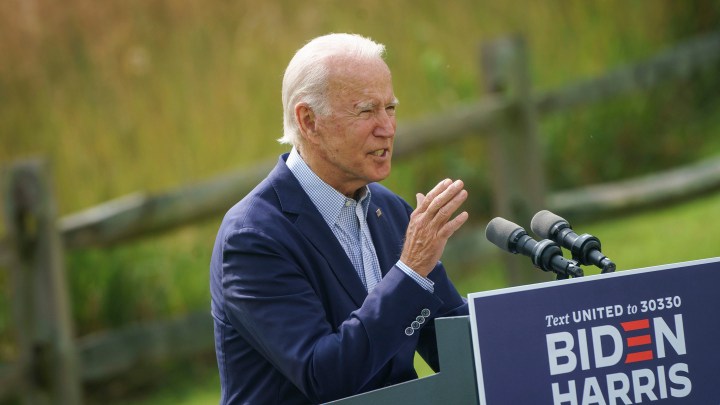 COPY
The coming executive actions are a start, but in order for Biden to meet the ambitious goals he’s set on climate change, he’ll need legislation passed by Congress. Drew Angerer/Getty Images

The coming executive actions are a start, but in order for Biden to meet the ambitious goals he’s set on climate change, he’ll need legislation passed by Congress. Drew Angerer/Getty Images
Listen Now

Marketplace’s Nancy Marshall-Genzer has some details. The following is an edited transcript of her conversation with “Marketplace Morning Report” host David Brancaccio.

David Brancaccio: What are some specifics?

Nancy Marshall-Genzer: Biden will be signing an executive order that will kick off a series of regulatory actions and elevate climate change to a national security priority. The New York Times is reporting that the order will require that 30% of all federal land and water be conserved by 2030, and eventually ban new drilling leases on federal land.

Marshall-Genzer: It’s a start. But, this ban we’re talking about would only affect drilling on federal land. Jonathan Adler, a professor at Case Western Reserve University School of Law, broke it down for us.

Jonathan Adler: The overall effect of preventing new leases for fossil fuel development on federal lands will actually be relatively modest. Federal lands accounted for about 20%, 22% of oil development in the United States, only about, I think, 12% of natural gas development.

Brancaccio: This executive order is — what should we a say — a step toward what he promised?