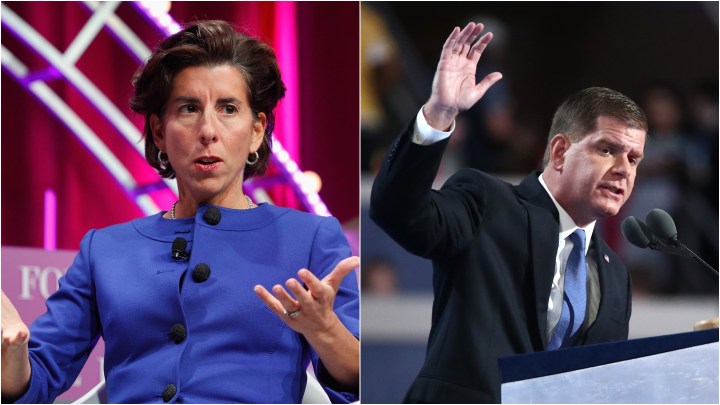 President-elect Joe Biden’s preferred economic team is coming more into focus with nominees now tapped to run the Departments of Commerce and Labor.

Marketplace’s Nancy Marshall-Genzer in Washington has the latest on the picks. The following is an edited transcript of her conversation with “Marketplace Morning Report” host David Brancaccio.

David Brancaccio: Let start with the Department of Commerce.

Nancy Marshall-Genzer: Biden has nominated Rhode Island Gov. Gina Raimondo as secretary of commerce. Before becoming governor, Raimondo started a venture capital firm. There have been tensions between Raimondo and unions. She overhauled Rhode Island’s pension system, making some cuts she said were necessary to avoid problems later.

Marshall-Genzer: He nominated Boston Mayor Marty Walsh. He might have been paired with Raimondo because he’s been a big labor supporter. In fact, Biden says Walsh would be the first union member to serve as labor secretary in almost 50 years. Corporations might not be too happy about that, especially since the Trump Labor Department has taken a very business-friendly approach.

Brancaccio: And at the Small Business Administration?

Marshall-Genzer: Biden nominated Isabel Guzman as head of the SBA. She was a top official at the SBA during the Obama administration. All of these nominees have to be confirmed by the Senate. If Guzman is confirmed, she’ll be overseeing coronavirus loan and grant programs, which had a rocky rollout. For example, the Small Business Administration was criticized for allowing big companies and corporate franchises to get Paycheck Protection Program loans.