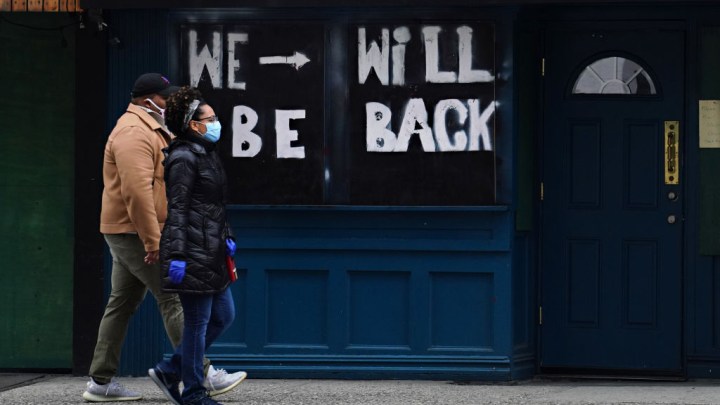 COPY
How can regulators make sure small businesses are the ones getting this money? Cindy Ord/Getty Images
COVID-19

How can regulators make sure small businesses are the ones getting this money? Cindy Ord/Getty Images
Listen Now

Big businesses — with the aid of big banks — have gobbled up some of the money from the rescue loans that were supposed to go to small businesses during the COVID-19 pandemic.

Regulators tried to address that issue with the latest round of funding released this week — by giving the big banks a timeout. The banks were shut out for a time from applying after getting flack for favoring bigger clients.

Here’s how the lockout worked: Small businesses go through their banks to get these loans. They fill out the application, and the bank processes it through an online portal with the Small Business Administration.

“The SBA basically set aside eight hours — 4 p.m. EST until midnight [Wednesday] night — just for smaller banks, presumably with smaller business clients, so they’d get a chance to get through the system and get loans approved,” Marketplace’s Nova Safo said.

Mehrsa Baradaran, a banking law expert at the University of California, Irvine, said the move amounts to a slap on the wrist for big banks, but could have unintended consequences.

Big banks are, of course, not happy about all of this. The head of one banking association said the SBA would be better off fixing its approval system.

Banks have been complaining about that online portal that they have to use to process loans. They say it’s glitchy and causing delays.

According to one banking group, almost 1 million loans have been processed so far in this second round of funding, so there’s some progress.