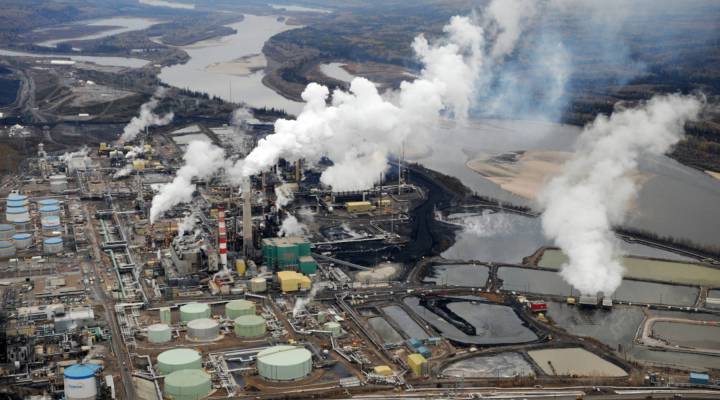 COPY
An aerial view of the Suncor oil sands extraction facility near the town of Fort McMurray in Alberta, Canada. MARK RALSTON/AFP/Getty Images

Last month, the leaders of three North American countries met for the annual so-called “Three Amigos Summit.” One of the results coming out of the summit was a pledge to reduce emissions, by promising to get at least half of the continent’s power from carbon-neutral sources by 2025.

Now, it appears Canada may be on the cusp of making a national carbon price, as Canada’s Environment Minister Catherine McKenna indicated to Bloomberg last week that the country’s upcoming emissions reduction plan would include a carbon price.

Speculation continues as to whether a carbon tax or cap-and-trade system will actually be required of every province, several of which have opposed such a plan. Andrew Light, a senior fellow at the World Resources Institute, said the minister’s statements did not clarify definitively whether a national plan will be instituted.

“I don’t think that it conclusively says that there will be a national system in place in Canada in the fall,” Light said.

Even so, he added that the vast majority of the nation already lives in regions that have a carbon price, or will soon.

“We have to keep in mind that five provinces in Canada do have some kind of pricing system on carbon, and that represents over 80 percent of the Canadian population,” Light said. “What we would call the subnational action in Canada is quite robust.”

The rollout of this action has been a bit of a patchwork in Canada, with some provinces like British Columbia instituting carbon taxes, while others like Quebec instituting cap-and-trade systems, which allow businesses that don’t emit as much carbon to sell their allowances to ones that do.

It’s not clear what form the national rollout of a carbon price would take. Andrew Finn, a senior program associate at the Wilson Center’s Canada Institute, said it’s likely a national plan would expand the strategies in place.

“These were all sort of created at different times, under different governments, with different goals and ideas about how in fact you put a price on carbon,” Finn said. “So this way, even if not everybody has the same exact scheme — whether it’s a tax or a cap-and-trade system — everybody’s sort of working towards the same goal, and everybody’s speaking the same language.”

A national carbon price is politically controversial within the U.S. at the moment. Only a handful of states have a cap-and-trade system, and only California trades with Canada. Light said if more Canadian provinces do adopt a system, it could make cap-and-trade more attractive to states.

“It should,” he said. “If there’s more partners, that means that there can be more trading, which means that you could have a more stable system.”