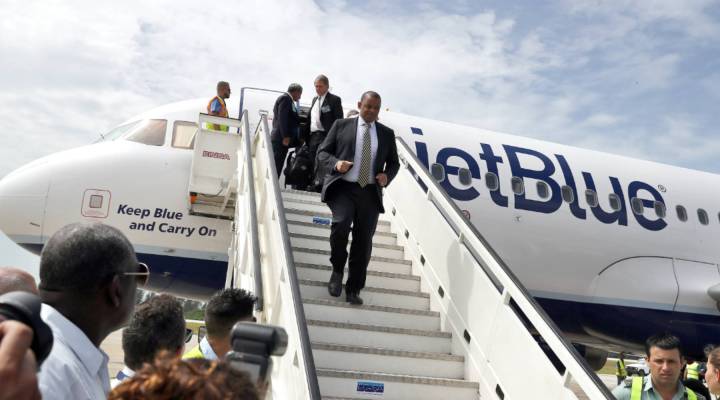 COPY
U.S. Transportation Secretary Anthony Foxx (front), deplanes upon arriving at the airport of Santa Clara, Cuba on the first commercial flight between the United States and Cuba since 1961. ALEJANDRO ERNESTO/AFP/Getty Images

U.S. Transportation Secretary Anthony Foxx (front), deplanes upon arriving at the airport of Santa Clara, Cuba on the first commercial flight between the United States and Cuba since 1961. ALEJANDRO ERNESTO/AFP/Getty Images
Listen Now

On Wednesday morning, a JetBlue airplane lifted off from Fort Lauderdale bound to Santa Clara, Cuba. It was the first U.S. commercial flight to the island in nearly half a century, marking a crucial step in normalizing relations between the U.S. and Cuba.

Five other airlines have gotten the green light for commercial flights to nine Cuban cities. Trips to Havana are expected to come later.

“It’s an opportunity for the travel industry, especially in Cuba. If anything, there’s going to be more demand than they really can meet at the beginning,” said Seth Kaplan, an analyst with Airline Weekly.

Cuba reportedly has fewer than 70,000 hotel rooms, and while renovations are expected at Havana’s international airport, it’s currently crowded.

Initially, most travelers will likely be from the Cuban diaspora, said Bustamante.

“These flights are a critical lifeline not only for Cuban families, but also for the small, emerging Cuban private sector,” he said.

Travelers to Cuba will still need to meet special qualifications in order to make the trip.

Before, qualified travelers had to book charter flights, which can be cumbersome and expensive. JetBlue’s one-way flights from Florida to Cuba start at $99.

That price “puts extra money in immigrant communities’ pockets and it makes it so those families can have much more cash available to buy the things their families need and that are still difficult to acquire on the island,” Bustamante said.