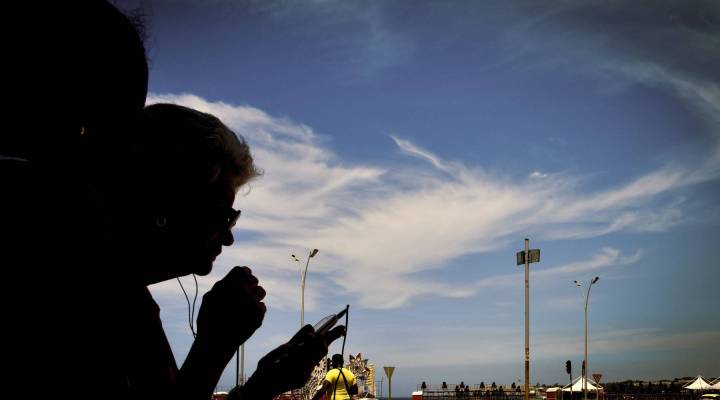 COPY
A Cuban speaks with relatives via internet in a street of Havana. Two Havana neighborhoods will get broadband as Cuba's tourism increases. ADALBERTO ROQUE/AFP/Getty Images

A Cuban speaks with relatives via internet in a street of Havana. Two Havana neighborhoods will get broadband as Cuba's tourism increases. ADALBERTO ROQUE/AFP/Getty Images
Listen Now

Visitors to Cuba often face both a frustrating and liberating reality: the lack of broadband or mobile Internet.

“You can’t rely on Google to settle your arguments, when you’re having a debate over dinner,” said Ted Henken said, co-author of the book “Entrepreneurial Cuba: The Changing Policy Landscape,” and Associate Professor of Sociology and Latin American Studies at Baruch College in New York.

“You remember the joys of conversation. And you remember what you used to do before you always had the option of checking your email, sending something, or doing a tweet or Instagram message,” Henken said.

But along with the good, comes the bad. Ordinary Cuban citizens are cut off from the Internet and much of the rest of the world. Some have access to dial-up, highly censored Internet, but most Cubans rely on an underground subscription network (tolerated by the Cuban government) of flash drives that offer weekly content of TV shows, films, articles, apps, and fashion magazines, Henken said.

“They call it the weekly packet, because they come out with a new packet of information … that is distributed throughout the island … It allows them to mimic a modern Internet nation without actually having it,” Henken added.

But now, the Cuban government is undertaking a landmark effort to plug into the actual Internet, in a partnership with Chinese telecom operator Huawei. Cuba will, for the first time, offer broadband Internet service, provided by its state telecom company ETECSA, to the homes of ordinary citizens in two neighborhoods in touristy Old Havana. It will also allow restaurants, cafes and bars to offer broadband access.

The announcement of the pilot program came just days after senior Obama administration officials traveled to Cuba for talks on how to increase connectivity between the U.S. and Cuba. Last week, the Obama administration also removed limits on U.S. telecom companies that want to expand communications on the island.

“A big opportunity right now is in the telecommunications sector. This is a big priority for the U.S. government. Every round of regulatory change that we’ve seen has been more and more opening in the telecom sector, so it’s almost as if there’s no embargo when you’re looking at telecommunications and the tech sector in Cuba,” said Alana Tummino, director of policy and head of the Cuba Working Group at Americas Society and Council of the Americas (AS/COA).

Tummino’s organization advises companies that want to do business in Cuba. She said the number of businesses which have contacted her organization for advice has multiplied since normalization of diplomatic relations. And as the business community waits to see whether and if Congress will lift the trade and financial embargo on Cuba, Tummino said many businesses are crafting Cuba strategies now, for the future.

Meanwhile, Cuba must build its infrastructure to be able to handle the influx. A modern Internet network is part of that effort, and Tummino said it will be crucial for future business investment. Tourist and business travelers are already demanding better connectivity.

“U.S. companies and global companies are highly dependent on Internet access for their business, so this is an important step,” said Eric Olson, Associate Director of the Latin America Program at the Wilson Center, a Washington D.C. think tank. “It may, in the longterm, really facilitate more investment, more opportunities for Cubans.”

Last year, the Cuban government opened up dozens of public WiFi spots. Even with Internet access at those hotspots priced at $2 an hour, a high price for ordinary Cubans who average a monthly salary of about $20, the WiFi spots have been popular.

That Cuba has now announced plans to launch broadband Internet for private use, even on a limited basis, is a major turning point, Henken said.

“The Cuban people … have been increasingly speaking with a singular voice on the issue of Internet access – free, massive Internet access. And the government has long used the U.S. embargo … and used security concerns, and often also used the argument of prioritizing social access, not private access,” Henken said. “That argument holds little water now that relations have thawed with the United States.”

But how far will Cuba go in opening itself up to the Internet? Olson said the use of a Chinese company might be a clue.

“I suspect the Cuban government will use Chinese enterprise, with regard to the Internet, since they have experience in opening, but only opening so far. And this is the big question: how far will they open the door to … people’s free and open participation, or access, to the Internet?” Olson said.