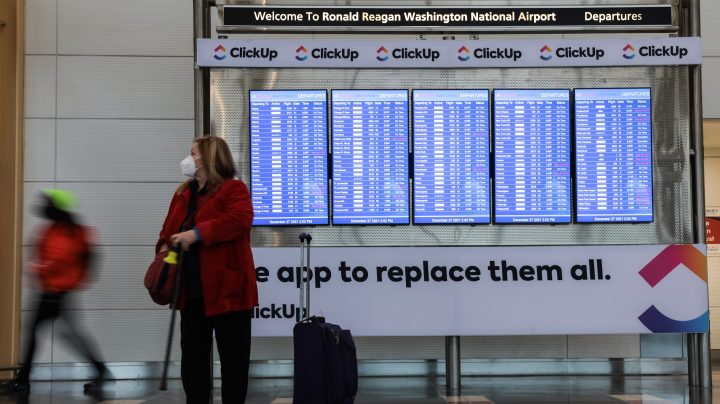 Airlines canceled more than 270 flights within, into and out of the United States on Monday, according to the tracking site FlightAware. Air travelers have been having a pretty rough time of it lately: Alaska and JetBlue blamed weather and staff shortages for their cancellations and delays over the weekend. Earlier this month, weather and logistics problems left flight attendants for Southwest and American stranded and reportedly sleeping in airports.

​Airports are now handling nearly as many passengers as before the pandemic on a day-to-day basis, and they’ve been having a tough time finding enough workers to staff flights, which could make for a rough spring and summer for the flying public.

International and business travel are still down substantially from pre-pandemic levels due to border restrictions and workplace changes.

But flying inside the United States, for family or fun, is a whole different story, according to Colin Scarola at CFRA Research.

It’s all about pent-up demand, and rising ticket prices don’t seem to matter much.

“You know, people want to travel again. And from what the airlines are saying, they’ve been able to increase prices in response to increased costs,” said Burkett Huey, an equity analyst at Morningstar.

They’re increasing costs for both aviation fuel and labor, since airlines have had to staff up and raise pay after major layoffs and downsizing early in the pandemic.

“If you’re an airline like Southwest, JetBlue, Alaska, Spirit — those domestic leisure-focused airlines that don’t do as much of the business and international — you would need substantial growth in your labor force to accommodate this record demand,” he said.

But there are still big headwinds, according to Tim Donohue at air-travel analytics firm Aerology, starting with getting more pilots in the cockpit.

“That training process has a bottleneck for simulator time. There’s bottlenecks for essentially instructors that sign off pilots right before they enter the line,” Donohue said.

It can also be hard to attract and retain flight attendants in the face of air-rage in the cabin. And the lowest-paid workers, in customer service and baggage, have other options.

Does Donohue think airlines will get things running smoothly by summer?

“Unfortunately, I’d have to say probably not.”

With airlines flying more with fuller flights, he said we can expect air traffic control to be overtaxed, leading to even more delays.