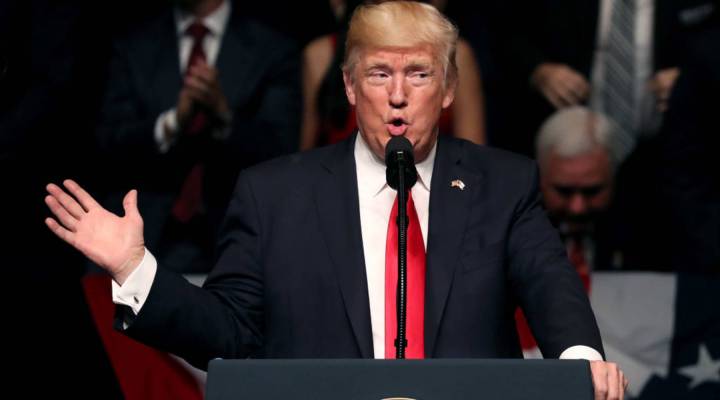 U.S. President Donald Trump speaks about policy changes he is making toward Cuba at the Manuel Artime Theater in the Little Havana neighborhood on June 16, 2017 in Miami, Florida. Joe Raedle/Getty Images

U.S. President Donald Trump speaks about policy changes he is making toward Cuba at the Manuel Artime Theater in the Little Havana neighborhood on June 16, 2017 in Miami, Florida. Joe Raedle/Getty Images

MIAMI (AP) — President Donald Trump declared Friday he was restoring some travel and economic restrictions on Cuba that were lifted as part of the Obama administration’s historic easing. He challenged the communist government of Raul Castro to negotiate a better deal for Cubans and Cuban-Americans.

Announcing the rollback of President Barack Obama’s diplomatic opening during a speech in Miami, Trump said Cuba had secured far too many concessions from the U.S. in the “misguided” deal but “now those days are over.” He said penalties on Cuba would remain in place until its government releases political prisoners, stops abusing dissidents and respects freedom of expression.

“America has rejected the Cuban people’s oppressors,” Trump said in a crowded, sweltering auditorium. “They are rejected officially today — rejected.”

Though Trump’s announcement stops short of a full reversal of the Cuba rapprochement, it targets the travel and economic engagement between the countries that has blossomed in the short time since relations were restored. The goal is to halt the flow of U.S. cash to the country’s military and security services in a bid to increase pressure on Cuba’s government.

Embassies in Havana and Washington will remain open. U.S. airlines and cruise ships will still be allowed to serve the island 90 miles south of Florida. The “wet foot, dry foot” policy, which once let most Cuban migrants stay if they made it to U.S. soil but was terminated under Obama, will remain terminated. Remittances to Cuba won’t be cut off.

But individual “people-to-people” trips by Americans to Cuba, allowed by Obama for the first time in decades, will again be prohibited. And the U.S. government will police other such trips to ensure there’s a tour group representative along making sure travelers are pursuing a “full-time schedule of educational exchange activities.”

Trump described his move as an effort to ramp up pressure to create a “free Cuba” after more than half a century of communism.

“I do believe that end is in the very near future,” he said.

Trump’s move was a direct rebuke to Obama, for whom the diplomatic opening with Cuba was a central accomplishment of his presidency. The new president’s action is broadly opposed by American business groups.

“U.S. private sector engagement can be a positive force for the kind of change we all wish to see in Cuba,” said Myron Brilliant, the U.S. Chamber of Commerce executive vice president and head of international affairs. “Unfortunately, today’s moves actually limit the possibility for positive change on the island and risk ceding growth opportunities to other countries that, frankly, may not share America’s interest in a free and democratic Cuba that respects human rights.”

In Cuba, Granma, the official organ of the nation’s Communist Party, covered Friday’s speech in a real-time blog, saying “Trump’s declarations are a return to imperialist rhetoric and unilateral demands, sending relations between Havana and Washington back into the freezer.”

On the stage in Miami, Rep. Mario Diaz-Balart, R-Fla., said the U.S. would no longer have to witness the “embarrassing spectacle” of an American president glad-handing with a dictator.

“President Trump will treat the Castro regime as a malevolent dictatorship that it is,” Diaz-Balart said. “Thank you, President Trump, for keeping your commitments. You have not betrayed us — you kept your promise.”

Obama announced in December 2014 that he and Cuban leader Raul Castro were restoring diplomatic ties between their countries, arguing that a new approach was needed because the policy the U.S. had pursued for decades had failed to democratize the island. Less than a year later, the U.S. Embassy in Havana re-opened.

The U.S. severed ties with Cuba in 1961 after Fidel Castro’s revolution, and spent subsequent decades trying to either overthrow the Cuban government or isolate the island, including by toughening an economic embargo first imposed by President Dwight D. Eisenhower.

The trade embargo remains in place under Trump. Only the U.S. Congress can lift it, and lawmakers, especially those of Cuban heritage, like Sen. Marco Rubio, another Florida Republican, have shown no interest in doing so.

Rubio staunchly opposed Obama’s re-engagement with Cuba, and he lauded Trump as he took the stage.

“Today, a new president lands in Miami to reach out his hand to the people of Cuba,” Rubio said.