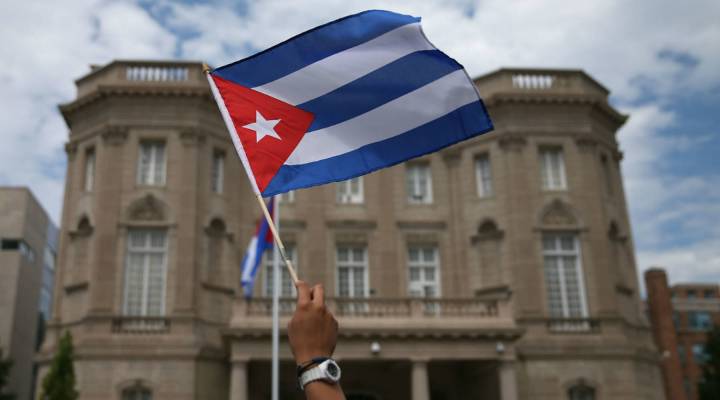 COPY
A supporter waves a Cuban flag in front of the country's embassy after re-opening in Washington, D.C. after 54 years.  Mark Wilson/Getty Images

A supporter waves a Cuban flag in front of the country's embassy after re-opening in Washington, D.C. after 54 years.  Mark Wilson/Getty Images
Listen Now

When it comes to the Latino Republican vote, Cubans are a big deal.

“They’re certainly one of the most influential, if not THE most influential group of Latino Republicans,” said Jens Manuel Krogstad, who studies Latino trends at the Pew Research Center.

But now, support for the party is eroding, and among the reasons why is the easing of sanctions against Cuba, especially for an older generation of Cuban-Americans who didn’t support it.

But there are holdouts. “Most people who left early after the Cuban Revolution do not support these changes,” said Jorge Duany, director of the Cuban Research Institute at Florida International University.

Nor do they tend to identify as Democrats, he added. But Republican support even among older Cuban-Americans has weakened, according to the most recent polls.

“This is the lowest percentage of Cuban-Americans who said they were going to support the Republican candidate ever since the poll was first conducted in 1991,” Duany said.