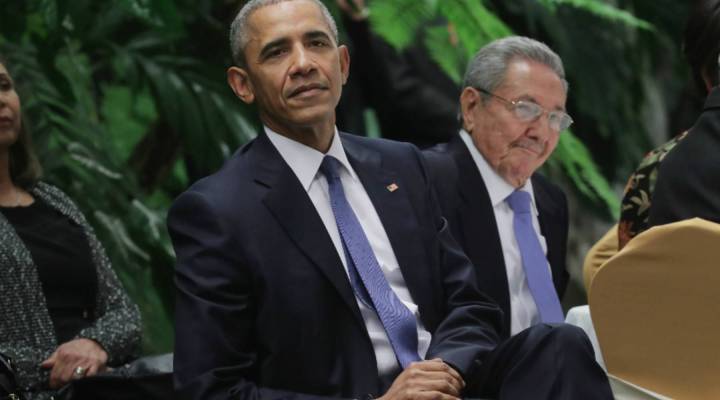 COPY
U.S. President Barack Obama and Cuban President Raul Castro listen to live music during a state dinner at the Palace of the Revolution on Monday in Havana, Cuba. Chip Somodevilla/Getty Images

U.S. President Barack Obama and Cuban President Raul Castro listen to live music during a state dinner at the Palace of the Revolution on Monday in Havana, Cuba. Chip Somodevilla/Getty Images
Listen Now

The initiatives the White House has undertaken in the last 15 months to normalize ties with Cuba, loosen travel restrictions, and allow the country to use the U.S. dollar for international transactions, among other changes, are already having a significant financial impact on the island. The changes will amount to $800 million in potential savings and new revenues for Cuba by the end of 2016, according to new estimates by the U.S.-Cuba Trade and Economic Council.

Moving forward — absent Congress fully lifting the embargo, which is not likely any time soon — “the number one goal of the Cuban government, and thus the Cuban people, would be to access U.S. credit markets,” said Kavulich. “Not just from the U.S. private sector, but from the U.S. government.”

However, he noted that even if Cuba were to gain access to programs at the Department of Agriculture or the Export-Import Bank, for example, the country would still struggle to qualify for credit, “because of their chronic shortage of foreign exchange and their chronic inability to pay their commercial and government-to-government bills on time.”

In addition to Congress, the ball also rests in the Cuban government’s court, said Theodore Henken, a professor at Baruch College who is currently in Cuba for President Obama’s visit.

He said Cubans often refer to an “internal embargo that restricts their economic and political and civic freedoms” as the ‘auto-bloqueo.’