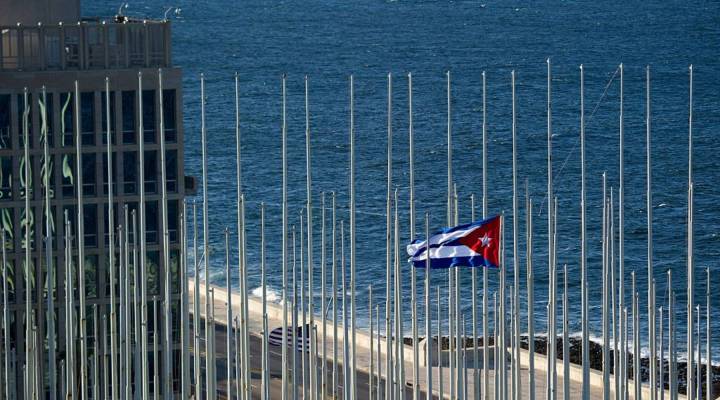 COPY
A Cuban flag flutters in front of the US Embassy in Havana. YAMIL LAGE/AFP/Getty Images

A Cuban flag flutters in front of the US Embassy in Havana. YAMIL LAGE/AFP/Getty Images
Listen Now

Wednesday marks another significant step in the thawing of U.S. Cuba relations. For the first time in decades, U.S. firms can begin offering their Cuban customers credit.

The easing of financial restrictions is consistent with the Administration’s goal to improve the lives of ordinary Cuban citizens.

“All these kinds of things are slowly but surely undoing 50 years of a restrictive policy,” he said.

U.S. exports to Cuba last year reached $175 million by the end of November.

Analysts predict with the greater availability of credit to Cuban customers, that figure could shoot up.

“For the other industries it’s a bit tougher right now, because you have to go in for specific advance approval from the U.S. government,” she said.

Kim said the Obama Administration can only relax so many restrictions on its own.

To really return to normal relations — including travel — Congress and the Executive Branch must work together.

Correction: A previous version of this story misspelled the name of the law firm Akerman. The text has been updated.