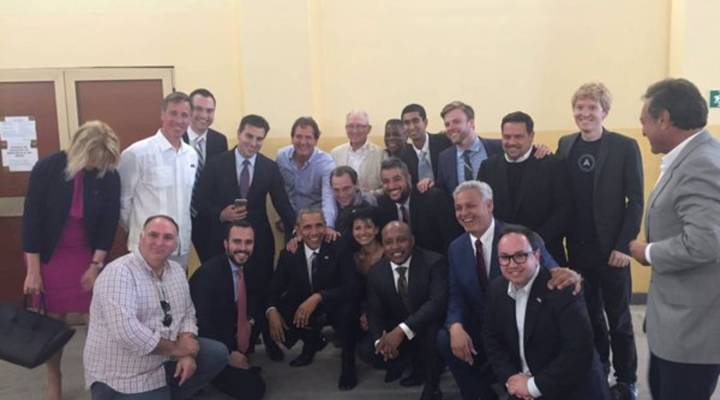 President Barack Obama’s historical convoy to Cuba resurfaced tensions around the country’s human rights record, casting a shadow of doubt over the countries’ path forward as friendly business partners. But, the president’s message is clear on how the U.S. and Cuba will find middle ground: Look to entrepreneurs.

“In a global economy, powered by ideas and information, a country’s greatest asset is its people,” he said in a speech Tuesday. “In the United States, we have a clear monument to what the Cuban people can build: it’s called Miami.”

He pointed to all the initiatives already in place, including agreements to restore direct flights and mail service, and loosening restrictions to allow Americans to travel and do business in Cuba. He also called out to Cuban small business owners by name to illustrate his focus on entrepreneurship.

What’s more, Obama’s administration invited a group of business leaders to join him in Cuba to talk about the obstacles a U.S.-Cuban business relations faces: dramatically different approaches to labor policy, Internet access and currency.

So who are these leaders the White House asked to represent the U.S. in Cuba? Some are expected: members of the Presidential Ambassador for Global Entrepreneurship, executives in the tourism business and tech leaders who are focused on bringing investing and international payments for businesses to Cuba. Others are a bit more surprising, including executives looking to expand their companies’ manufacturing footprint or workforce to Cuba. These individuals, and their businesses, provide a glimpse of the U.S. government’s vision for Cuba’s future:

A chef, restaurateur and culinary expert, Andres joined the President’s entourage as the State Department’s Culinary Ambassador. He is the owner of Think Food Group, which has opened restaurants all over the United States. Andres formerly competed on “Iron Chef America” in 2007 — beating Bobby Flay, he has also been a judge on “Top Chef” and appeared on Anthony Bourdain’s “No Reservations.” While in Cuba, the restaurateur spoke at a panel of business leaders and lead a discussion about entrepreneurship in the food industry.

Born and raised in Cuba, Berenthal came to the U.S. in 1960 and has been a frequent traveler to the country since 2007. The retired software engineer co-founded CleBer to manufacture small tractors for family farmers, and the company aims to become the first U.S factory in Cuba since the revolution.

“I understood the needs of the Cuban economy,” Berenthal told Forbes. “Cuba has to import more than 70 percent of what people eat. They’re still using oxen to farm the land. Our motivation really is to help the Cuban farmer be more productive.”

Burns is interested in better understanding the business and economic pressures Cuba faces, so that the company can establish a presence. She told CNBC that the company wants to be in any country where it can legally do business. The company currently operates in 180 countries. Her mission fits into the U.S.’s focus on increasing export and trade, but that means Cuba and the U.S. will need to figure out how the countries work through infrastructure issues, and differing currency and employee management regulations.

“We’re on a fact-finding mission. It’s early days, obviously, for the potential opening up of a market,” she said. “We need to understand more as early as possible so we can be ready, more ready, to partner up with the Cubans as they open up their markets.”

Airbnb was one of the first companies to take advantage of loosened travel restrictions to Cuba. The country is now the company’s fastest growing market, making it an important focus for CEO Brian Chesky.  Airbnb has 4,000 listings in Cuba, with 2,700 in Havana, Chesky told CBS News. More than 3.5 million people have visited the country since the U.S.’s regulatory actions. It’s a major boon for short-term rental companies like Airbnb, given Cuba only has 63,000 hotel rooms. Chesky’s interest in Cuba lies in this growing opportunity. Airbnb was already able to capitalize on the country’s already existing casas particulares network, an informal practice of homeowners who rent their houses to travelers.

“It was viewed as a new idea and here it was something that was already familiar to the culture. There were tens of thousands of people that were already sharing their homes and so we felt like it wasn’t that big of a risk. And all we had to do was make sure the community embraced Airbnb,” Chesky said.

With the U.S.’s recent decision to also allowing non-US travelers to visit Cuba, he expects even more business to follow. Chesky has taken up Airbnb’s foray into Cuba as a platform as a member of the White House’s PAGE group. In a statement about his position, Chesky said he will personally focuses on working with business leaders in Cuba to “increase Internet literacy, while also providing practical education in areas like photography and marketing, and facilitating new payments solutions that will not just help Airbnb, but allow other platforms to come online as well.”

The chairman of microlender Kiva, Hanna is an ambassador from the White House’s global entrepreneur initiative. The company lends to business domestically as well as internationally, with loans averaging no more than $500, according. She’s likely interested in how Kiva can solidify its work in Cuba. The entrepreneur and angel investor has is also an advisor to companies like Lyft, Bonobos, MightyText, Idealab and Lending Club.

“The red thread in all of my work and certainly Kiva’s is that talent is universal but opportunity is not,” Hanna told Bloomberg. “We all have that entrepreneur’s instinct. It’s just been nurtured more in some of us.”

John is best known as the founder of the clothing brand FUBU and a judge on the ABC show “Shark Tank.” In May of 2015, John was named a Presidential Ambassador for Global Entrepreneurship (PAGE), an initiative between the White House, Department of Commerce and American business leaders. So for this trip to Cuba, he was acting as a PAGE Ambassador and a discussion leader on entrepreneurship.

John said he wants to “spread the word” about entrepreneurship to the people of Cuba.

Journalist and CEO of Starfish Media, O’Brien isn’t reporting from Cuba, instead, she moderated two discussions — one with Michelle Obama and teen girls in Cuba and another with the President and Cuban business people. O’Brien is Cuban American; her mother immigrated to the United States from Cuba and she has extended family on the island.  The panel she moderated with Michelle Obama was a part of the First Lady’s #LetGirlsLearn campaign, aimed at improving education for girls on a global level.

“I started a foundation that helps young ladies about your age — for young girls who might need some guidance and help and support.” O’brien told students at the panel.  “It’s called Starfish Foundation, and we help pay for girls to go to school. Because in America, school, college is pretty expensive.”

Schulman wants to connect with Cuban entrepreneurs to find out what opportunities payment service PayPal may have to fit into their businesses.

“We are excited to see how PayPal’s global payment platform can help small businesses in Cuba thrive and grow by making it easier to connect to international markets,” he wrote in a blog post before the trip. PayPal is all about extending its reach to all the corners of the globe, so expanding Xoom, a global money transfer service, to Cuba is a natural part of that mission. U.S. residents send $2 billion to Cuba annually, and these remittances serve as 3 percent of Cuban GDP.  PayPal expects Xoom to be available in Cuba by the end of this year.

Siegel oversees the hotel chain’s legal and governmental affairs globally. The company made deals with three hotels this month, making it the first U.S. hotel company to enter Cuba in nearly 60 years, according to a press release. Like other hoteliers, Starwood sees a majority tourism opportunity in the warming relations between the U.S. and Cuba. Siegel is likely to pay attention to how Cuba’s employee policies will play into Starwood’s operations, as one of his responsibilities at the company is labor relations.

Marriott is planning for a merger with Starwood, so Sorenson’s object will probably mirror that of Starwood’s Siegel. Navigating Cuba’s foreign investment laws, which limits foreign ownership stake and requires companies to hire workers approved by the government, can be difficult, Sorenson told USA Today.

“This is one of the riddles. How do you attract foreign capital to Cuba in the context of a socialist economy which has very different rules than typically work for industry?” he said. “That’s the path [the Cuban government has] to navigate. It’s obvious that that new capital won’t come in unless the rules are set up in a way that allows that capital to get a return. If those things can be done, the capital will come in.”

Tyle is an investor based in the heart of Silicon Valley. As the co-head of seed funding for NEA, he focuses on consumer technology and emerging markets. He is also the founder of S2 Capital, a micro-fund focused on entrepreneurs in the developing world. For the Cuba trip, he was tasked with leading a round-table for Cuban entrepreneurs, “all of whom are hungry to access investments from a country that has blocked them off since the embargo signed by JFK,” he wrote in his blog. “They have asked me to speak on accessing capital and the importance of entrepreneurship for Cuba, but I’m pretty sure they already know that the companies they create will have an impact not just on the future of their families, but on the future of their country.”