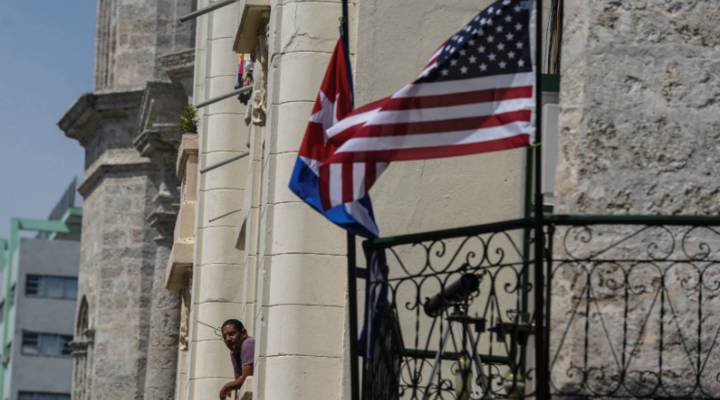 COPY
Cuban and U.S. flags are seen outside a restaurant in Havana, Cuba on Thursday.  YAMIL LAGE/AFP/Getty Images

Cuban and U.S. flags are seen outside a restaurant in Havana, Cuba on Thursday.  YAMIL LAGE/AFP/Getty Images
Listen Now

President Obama is headed to Cuba this weekend, along with an entourage of diplomatic and trade officials. Airlines have been bidding for rights to fly new routes to the island as restrictions are lifted on the country, and the U.S. Postal Service announced this week it was resuming direct transportation of mail with Cuba for the first time in 50 years.

But, without Congress, there’s only so much President Obama can do to strengthen economic ties between Cuba and the U.S., according to Gustavo Membiela, a partner at the Hunton & Williams law firm in Miami.

“The biggest change,” he said, “has been the message from both sides that they actually want to take steps improve relationships.”

Nevertheless, Membiela said it’s still pretty tough for a U.S. company to set up shop in Cuba. “There are issues with the currency exchange within Cuba, there’s issues with employing Cubans if you are in a permitted sector,” such as agriculture or telecoms. Cuba could ease those currency restrictions if things go well.

“Getting money flowing between countries, getting the postal system working between countries — all of that is happening,” he said, “and it’s going to make companies want to do more in Cuba. The question also is, what is Cuba going to allow?” A question Mr. Obama will be trying to answer next week.