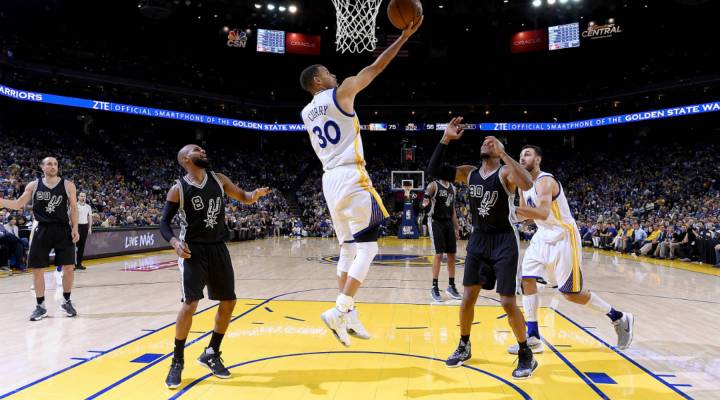 COPY
The Golden State Warriors go up against the San Antonio Spurs back in April. Thearon W. Henderson/Getty Images

The Golden State Warriors go up against the San Antonio Spurs back in April. Thearon W. Henderson/Getty Images
Listen Now

Here’s a potential happy marriage: The NBA has inked a deal to produce exclusive programming for social media giant Twitter.

To capture more fans in the digital age, the league plans to pump out more behind-the-scenes content.

Twitter is betting that the money-making machine that is professional sports will bring in new ways to generate cash.

And let’s be clear, basketball is perhaps the most intimate sport, where it’s easy to see the players’ faces full of anguish, anger or elation.

Sprinkle in a few hours’ worth of tweets during game time and Ezekiel Kweku, an avid Golden State Warrior tweeter, said you find yourself in a large, loud conversation.

“There’s something happening on each play, and so there’s always something to talk about,” he said.

NBA executives understand their games lend themselves to snappy one-liners and eye-rolling jokes.

Plus, the players themselves seemingly love it – with about 70 percent of them tweeting from their own accounts, according to the NBA.

But how do ESPN, TNT and ABC – who all broadcast league games – feel about the league’s deal with Twitter?

Syracuse University sports management professor Rick Burton said “as leagues like the NBA or the NFL want to give their younger fans more immediate access, it’s a threat in a lot of ways to the mainstream TV broadcasters.”