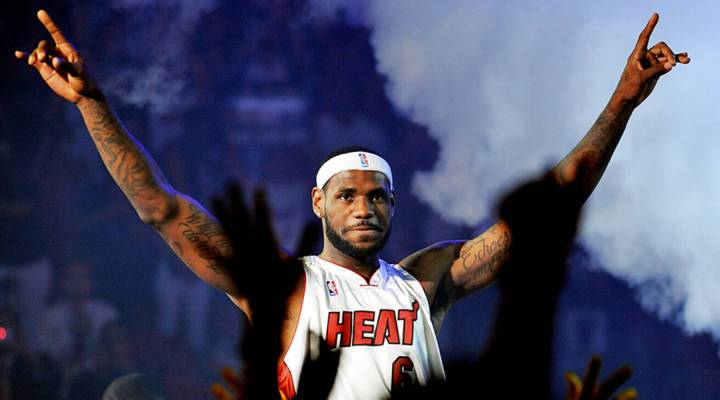 Steph Curry’s buzzer-beating three-pointer from Game 2 of the NBA Finals has been relived millions of times on Instagram. But not on the Golden State Warriors official account. Or ESPN’s. Or TNT’s for that matter. Instead, the clip blew up on the account called House of Highlights, which has some 9.3 million followers. House of Highlights is doing something that social media managers at major sports networks may be kicking themselves for not doing first. It’s posting highlights from sports, both professional and amateur, all day, every day. Omar Raja started House of Highlights as a way to keep up with his favorite basketball star, LeBron James. He talked about it with Marketplace Tech host Molly Wood. The following is an edited transcript of their conversation.

Omar Raja: Well, it first started in July [2014], when LeBron left the Heat to go back to Cleveland. And I was kind of a bummed-out sports fan, and I was looking for memorable moments between that Big Three Heat team, because it was like a family, that team. They had the most amazing, I would call them “GIFable” moments, that people used to share. And what sucked is when that team left, I was kind of looking for some of those moments and I felt like no one had them. I searched on YouTube, I search on Twitter, I search on Vine at the time, and I said to myself, “There’s nobody posting this, and this is content that’s being shared across the internet. I need to find a way to kind of get involved.” So after a couple of weeks, I went on Instagram,  I made an account called The Highlight Factory, and then my friends gave me a hard time with the name, so I changed it to House of Highlights, and it kind of started from there.

Molly Wood: So, this was 2014, we should clarify for those who were not marking their calendars when the LeBron left the Heat. About a year later, you got an email from Bleacher Report and got acquired, if you will?

Wood: Were you monetizing the account before that? Or was it mostly a hobby?

Raja: Not really. It was mostly a hobby. I was kind of a college kid, I had a passion for it, and you know we’ve honestly just started monetizing. We have an “invite only” thing with brands that started in November of last year.

A screenshot of Raja’s House of Higlight’s Instagram page.

Wood: I mean, is the NBA kind of the bread and butter, would you say, of the account overall?

Wood: To that point about basketball players and soccer players, they don’t wear helmets or hats. So you can see their faces, which makes them more social media friendly.

Wood: Really? So, helmet syndrome is like a barrier for social media in particular?

Wood: Do people watch the game do you think with House of Highlights up next to them? I certainly do.

Raja: Absolutely. We’ve noticed a spike after every commercial break. So during the Western Conference finals, I would have the clip ready and the second the commercial started I would post the clip, and that’s when you get the biggest bump, because everyone’s grabbing their phone and checking Instagram.

Wood: I feel like a lot of what is happening between the internet and television in particular is a shift in the power dynamic, where it’s like the consumer finally is in control. And when I look at House of Highlights I think, “This is so easy.” This would have been so easy for the NFL to do or the NBA to do. Why did it take you?