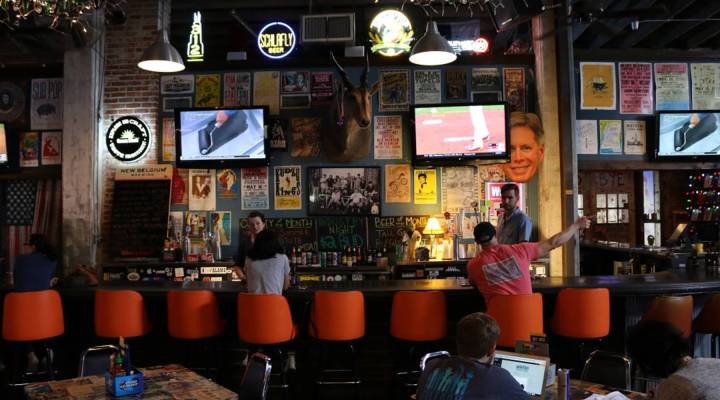 COPY
Hey Joe’s restaurant, bar, and music venue is a favorite among local Delta State University students. This eatery is one of the newer businesses to occupy downtown Cleveland, Mississippi. Tommy Andres/Marketplace
How The Deck Is Stacked

Hey Joe’s restaurant, bar, and music venue is a favorite among local Delta State University students. This eatery is one of the newer businesses to occupy downtown Cleveland, Mississippi. Tommy Andres/Marketplace
Listen Now

This is the second in a two-part report on economic inequality and race, reported in conjunction with Frontline and PBS NewsHour for the collaborative series “How the Deck is Stacked.” The first aired last Friday.

The old railroad tracks that divide the east side and west side of Cleveland, Mississippi meet downtown on Sharp Street in an area called Cotton Row.

Linda Stringfellow, the director of AmeriCorp VISTA in Cleveland, says the old tracks still divide whites and blacks, the haves and have-nots in the town.

“In Delta towns, still today, rivers and railroad tracks divide,” she said. “You go over a river or a railroad and you’ll see the difference automatically in the economy, the housing, the businesses.”

AmeriCorp VISTA is a national anti-poverty organization, so Stringfellow says she’s “right in the trenches” of the fight against it. She grew up in the Delta, and says just like many of the folks she works with today, all she knew was what she knew.

“We didn’t know that we were poor,” Stringfellow said. “It was just like asking a fish ‘how does that water feel?’ The fish is going to say ‘what water?’ Because that is the only environment that they’ve ever known.”

Stringfellow is in her 40s, and says Cleveland is in no better shape today than it was when she was growing up. So why is the conversation over race and poverty so stuck here?

A family walks along Cleveland, Mississippi’s downtown promenade. Before the paved walkway existed, train tracks separated the African-American and White sections of town.

Stringfellow believes there is a system in place in the Delta that can in large part determine a child’s chances of success, depending on what side of the tracks he or she is born on.

“If you’re really going to look at poverty, you are going to have to start looking at greed,” she said. “Are these structures set up from greed? Does greed stimulate poverty? It’s your distribution of wealth. If you are not at the table, you become the meal.”

Mike Carr is an attorney in Cleveland. He grew up white and middle class on the west side of the tracks, but as a public defender he represents defendants who have been accused of felony and who fall below the poverty line, and in Cleveland, Carr said that pool is resoundingly African American. The divide often makes his work difficult.

“One of the problems that I see is parents and other members of the community that have distrust of so many things in this world that they hold the next generation back. Certainly a distrust of the lawyer who comes knocking on the door saying, ‘I’m here to help,'” he said. “If you take somebody who’s had stuff taken away from them their whole lives or have been tricked or disadvantaged or something somehow, in order to trust somebody, particularly a white person that’s been doing that to the black community, our history’s been terrible, for me to come knocking on the door saying, ‘I’m here to help,’ even though I am really here to help and I’m not getting paid by you, I do have your best interest at heart.”

Carr said the conversation about race and inequality is a tough one to have across racial lines.

Carr said he grew up going to public high school and playing sports, and those interactions have helped him and others in his generation grow to being open-minded.

“But there is a generation before and certainly two generations before that will never change,” Carr said. “That generation I believe is just going to have to live the rest of their lives and die out.”

But in the meantime, how does a community hold onto those future generations when statistics point down a tough road?

Chiquikta Fountain works for Parents for Public Schools, a group that helps parents take a more active role in their child’s education. She’s also a parent herself to a 13-year-old son named Maurice. She said she hears about opportunity a lot in her work, and the perception is that there is none in Cleveland for young people of color.

“(They believe) there are none, that if they stay they’re trapped,” she said. “That if they choose to go to school and pursue a college degree, that there’s no guarantee they’ll get a job once they graduate, so they opt to leave.”

Maurice is no different. He he wants to go to college, but he doesn’t think Cleveland is the right place to prepare him for that path.

“I want to go into chemistry when I grow up, and people have told me that I have a really brilliant mind and stuff like that, but I just felt like from my standpoint I didn’t really see any opportunities here,” he said. “Nobody’s really doing anything.”

When asked where he would like to go, Maurice pauses.

“Anywhere besides here,” he said. “There’s a lot of places that are way better than Cleveland. They have those little bumper stickers that say ‘Keep Cleveland Boring.’ I don’t want boring. I want something that grabs my attention.”

Chiquikta Fountain said it kills her to hear her son talk like that about the town she’s raising him in, but she knows it means something coming from him.

“It’s a bit of an ‘ah ha’ moment because he realizes that he’s not getting the access that he needs here in Cleveland and if he realizes that as a 13-year-old then that’s beyond me as an adult. If my son is saying that then there has to be some validity to it,” she said. “I really feel like there is this system that is put in place to ensure that things remain the same. Where everyone is not presented the same opportunity.”

A lot of the people we spoke with in Cleveland talked about a system. The way money is funneled into certain places and not into others. The way opportunity exists for some but not others. Sort of an unspoken conversation about power and money and race and opportunity that feels louder depending on what side of the tracks you’re on.

And while Cleveland and the Mississippi Delta might seem like an extreme example, the fact is that the national statistics are almost as astonishing:

Unemployment is twice as high for black Americans as it is for whites.

Ten percent of white Americans live below the poverty line, while 26 percent of black do.

Seven out of ten black kids actually wind up worse than their parents.

But maybe not Maurice Fountain.