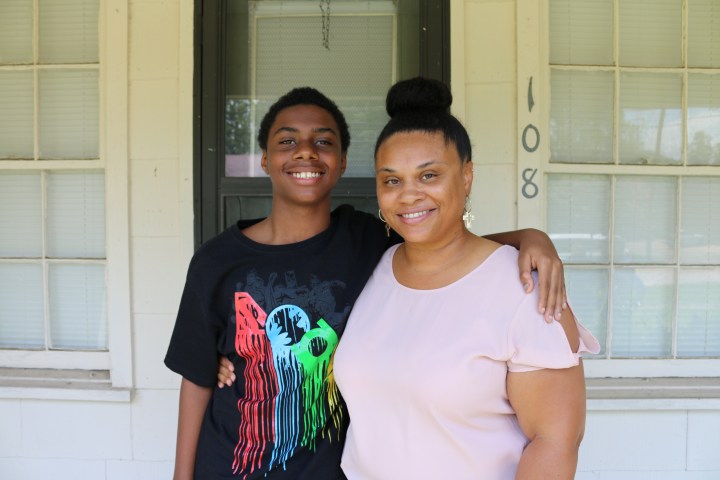 COPY
Chiquikta Fountain and her son Maurice at their home in Cleveland, Mississippi, in 2016. Marketplace

Chiquikta Fountain and her son Maurice at their home in Cleveland, Mississippi, in 2016. Marketplace
Listen Now

Back in 2016, Marketplace took a reporting trip to the Mississippi Delta for a project about race, poverty and economic mobility, to a little town called Cleveland, Mississippi, where we met Chiquikta Fountain and her son Maurice.

Cleveland is one of those towns in the South where money gets funneled into certain places and not others, and where opportunity exists for some, but not for others.

Fountain saw that every day in her work for a youth services group.

That stuck in Fountain’s mind, so much so that she wanted to leave and find her opportunity someplace else. And so did Maurice.

“Just anywhere besides here,” he said. “Like, there are a lot of places that are way better than Cleveland.”

Four years later, Fountain is now the executive director of a community nonprofit organization called Delta Hands for Hope. She spoke with host Kai Ryssdal. Below is an edited transcript of their conversation.

Kai Ryssdal: Chiquikta Fountain, it is so good to talk to you again.

Chiquikta Fountain: Likewise, thank you so much for having me again.

Ryssdal: Talk to me about you for a minute. You have now a different job than you did four years ago. You’re working in a nonprofit about community. And that’s part of why I wanted to get you back on the phone. How much of an impact has the pandemic had on you? I mean, you’re pushing forward, we’re all trying, but, come on, brass tacks — how you doing?

Fountain: Yes, this situation has only exacerbated a problem that was already prevalent in our community to begin with, and that’s poverty and the mindset of poverty. And to see how this pandemic has, first of all, taken children out of school, it has altered their way of life, how they go about receiving education. And a lot of our families rely heavily on schools, not just for education, but for food. So it’s been really challenging when you’re working with a community that is so used to not receiving love and support. So it’s been a lot. It’s been a lot.

Ryssdal: You are, I get the sense of it — and we didn’t talk about this last time — but you are, fundamentally, it sounds like an optimistic person. And I wonder whether you are hopeful now, as well, given everything that’s going on?

Ryssdal: So let’s talk about the youth, and let’s talk about your youth, your son Maurice, who is clearly just your joy, you can hear it in your voice. Last time we were there, he was 13 or something. He’s going to be a senior in high school now. Apparently, he’s athletic and smart and wants to go places. When we were there in 2016, you two said you had been talking about leaving the Delta for better opportunities. And he said, “Yeah, I want to get out of here.” And it sounds like now what’s happened is that you have become reinvested in your community where you are. And I guess what I want to know is what’s Maurice thinking? Because he’s at a decision point now, or will be real soon.

Fountain: Absolutely. And to be honest with you, as it relates to college, he still wants to leave. But when I talked to you in 2016, I was so — I wasn’t happy with a lot of the things that were going on in regards to my career, and where I felt I should be, and where I wanted to go in my life. So I had to come to terms with myself and either see where I was as an obstacle or as an opportunity. So I decided to start seeing it as an opportunity. And from that point, I made it my mission to empower every young mother that had a young child, that wanted to go back to school, that wanted to change jobs or wanted to find ways to volunteer and become more engaged in their community. And I started taking Maurice with me when I started going out and doing community engagements, getting him more involved in his community and what’s going on. And not to say that those things altered or changed, you know, his wishes, or, you know, desires to leave. But I do, you know, just emphasize to him the importance of finding who he is and what he wants to do with his life, but never forget about how he can use those experiences and who he is, that journey, to help someone else.