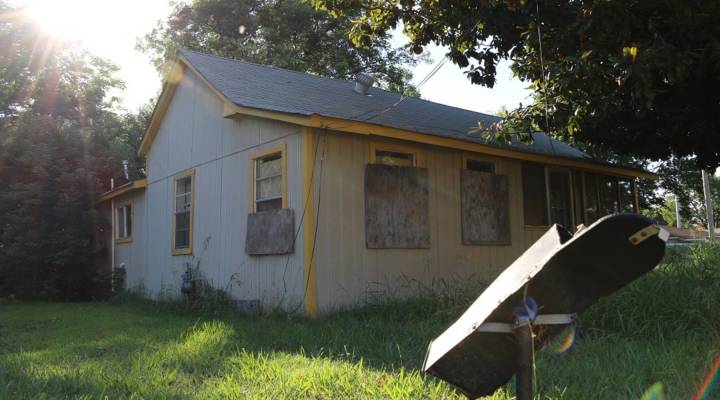 COPY
A house sits neglected in East Cleveland, Mississippi, the predominantly African-American side of town. Tommy Andres/Marketplace
How The Deck Is Stacked

As part of our collaborative series with PBS NewsHour and Frontline called “How the Deck is Stacked,” we’re examining how race, poverty and economic mobility intersect in America. This is the first of a two part series, the second can be found here.

The Republican National Convention kicks off in Cleveland, Ohio, on Monday.

But instead of going there to listen to the speeches, observe the pageantry and watch the electoral process at work, we decided to do something a little different. Which is how I ended up at the end of a long, torn up road, on the porch of Catherine Wilson. She doesn’t live far from Cleveland. Not Cleveland, Ohio … Cleveland, Mississippi.

Wilson is 67, African-American, and has lived her life in the Mississippi Delta, with its reputation for soul food, blues, and entrenched poverty.

She is also the woman in this photograph, on the upper right with the striped dress.

See more of Robert Kennedy’s tour of the delta.

Courtesy of the Jim Lucas Estate

The white man in a suit, whose hair is being lifted by the wind? Then-Senator Robert F. Kennedy. His goal was to gauge the effectiveness of the War on Poverty, declared just three years earlier by President Lyndon Johnson.

One of the families Kennedy met with was Wilson’s, when she was 18-years-old and living with her mother.

“It was a big deal,” Ms. Wilson recalled. “I remember him. Those were joyous times for me and the others.”

The future presidential candidate played with the local children, rolling them in tractor tires. But there were also serious matters at hand in Cleveland, Mississippi, including deep poverty and pervasive racism.

“He asked my mom what they want him to do. So they told him: they want jobs and housing,” she said.

Kennedy was appalled by what he saw. Shacks with dirt floors, children with distended stomachs, surviving on infrequent meals of biscuits and molasses. They lacked clothes for school.

Kennedy moved on, but Wilson said, the promised housing arrived, at least in part.

“We got the houses,” she said. “We didn’t have no housing when he came.”

Catherine Wilson, 67, talks with Kai Ryssdal on her porch in East Cleveland, Mississippi.

Wilson now lives alone in her house in a community called Freedom Village, a failed experiment of sorts, that provided housing to black farmers who were forced off of plantations. There were plans for fifty homes, a laundromat, a convenience store, but they never got that far. Today, just a handful of the homes that were built remain, and most of those look like they’re on the verge of collapse. But Catherine Wilson says things have also changed for the better.

“I think I’m better than I used to be. We don’t have anybody to come tell us what do and get up. You know, back then in the ’60s, we didn’t have enough to eat and enough to survived on, and we had to move from house to house.” Now, she says, “We own our land proper.”

Her mother lived to age 97, and I imagined she would do the same.

“Well, I pray to God I do. And I hope to see action,” Wilson said. What would that look like, I asked. “Progress. Better than it was 50 years ago. I’m looking further up the road. I still believe.”

Almost 50 years after Bobby Kennedy was here, Mississippi is ranked 51 among the states in poverty. One in five households live below the poverty line, and one in ten below half of it, which is labeled deep poverty. For a family of four, that’s an annual income around $12,000. Mississippi also has the highest proportion of black residents in the country at 38 percent.

Ellen Meacham is who helped us track down Wilson. She teaches journalism at the University of Mississippi, and wrote the forthcoming book, Delta Epiphany: RFK in Mississippi. While technology helped other areas of the U.S. advance throughout the 20th century, technical progress had a human cost for Southerners with limited means.

“The Delta has always been poor, but herbicides, pesticides and all of that made it cheaper and easier for the farmers to just go ahead and fully mechanize. So you had tens of thousands of people in the spate of just a few years who didn’t have to work in the fields anymore, and some of the War on Poverty initiatives actually made things worse and actually made people hungrier,” Meacham said.

Hunger — for jobs, change, and food alike — was a common theme in our visit. Just off the main drag in Cleveland, Highway 278, there’s a powder blue building that looks  like an old stretched-out double-wide, a restaurant called The Country Platter. The owner is Jimmy Williams. The day I visited, The Country Platter was getting a new front door, so it was closed for the day. A little break for its industrious proprietor.

“I’m in the restaurant every morning about three o’clock,” he said. “The simple reason is we cook everything. We don’t have canned food … I cook about 95 percent of it.”

Williams has lived all of his 70 years in Cleveland. He bought his restaurant in 1994. It used to be called Lillie’s Cafe, and has its own rich history.

“Back during the Civil Rights Movement, all the people that would be coming through Cleveland would meet here,” he said. Martin Luther King, Jr. Ralph Abernathy. Local hero Amzie Moore. Williams says all of them have eaten in this restaurant.

Williams says he doesn’t think it has improved much for the black residents of Cleveland. Statistical measures bear that out. Just over 12,000 people live in Cleveland today: half black and half white. The disparities in economic outlook are stark.

The unemployment rate for whites in Cleveland is 6 percent. For black residents, it’s 22 percent.

The poverty rate for whites who live in Cleveland is 12 percent. For blacks, 37 percent.

In an effort to combat hunger, Williams keeps a list of residents who sign in and eat for free.

A list of Cleveland, Mississippi residents who are served free meals at The Country Platter. Hunger is an issue in the city; the list is nine pages long.

“They only time they get off [the list] is when they die off. But up until then we just feed them,” he said.

Williams offered to show me around town — to see both Clevelands. We started our tour on the East side of Cleveland, by the Family Dollar and liquor store, not far from a constellation of auto title loan and check cashing shops. We pass shotgun houses with plastic bags covering the windows, one with seven cars in the yard. Williams tells me this is the oldest thoroughfare on the black side of Cleveland, once known for stately homes. At his 50th high school reunion, many of his classmates noted that the town seemed worse off than when they were children.

“Back then those houses were nice, but now they gone down and nobody makes sure that they are taken care of,” Williams said. “It’s really sad.”

At this point in our tour, we crossed the railroad tracks, and true to every cliche, everything changes. We’ve entered West Cleveland, the historically white section of town. Williams points out the tidily cut grass and sidewalks free of litter. He seemed both impressed by the care taken by West Cleveland homeowners, and disturbed by the origin of their neighborhood pride.

“I think it’s more of a racist problem. They don’t want to see people do too good,” he said. “They want to keep ’em down. You got a few people that up, and those are the ones they want to deal with.”

I asked if he thinks the system is rigged against him and other African-Americans.

“Yeah,” he said. “I think it really is … I want to see it better for this simple reason. I want some of my grandchildren to come back, to live and feel good about themselves.”

It’s pretty clear there are two economies in Cleveland. The West side is home to Delta State University, the new Grammy Museum, a country club. And while there are a handful of new houses and apartments on the East side, there are the liquor stores and pay day lenders, fast food places and a lay-away furniture shop. The big question is why?

In our next installment we start on those old tracks to search for an answer. We’ll also go back to Kennedy’s historic visit in 1967 to see what we can glean about the journey ahead.