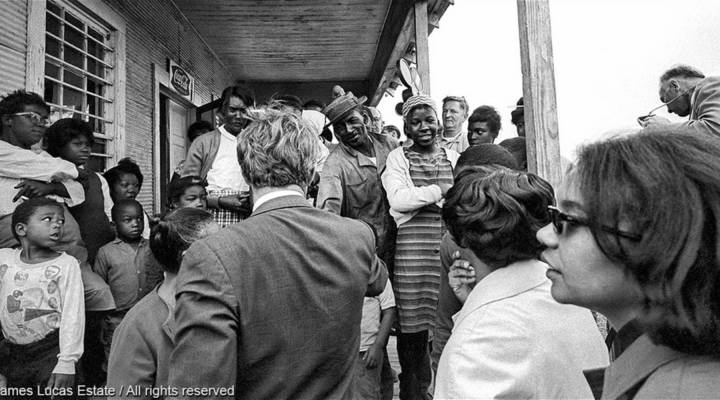 COPY
Marian Wright Edelman (foreground, right) escorts Robert Kennedy (center with back to camera) on his historic tour of the Mississippi Delta. Courtesy of James Lucas Estate
How The Deck Is Stacked

In 1967, Senator Robert Kennedy took a tour of the Mississippi Delta to assess how President Lyndon Johnson’s then-three-year-old War on Poverty was working. Our two-part series (read part 1 and 2) about race, poverty and income inequality in Cleveland, Mississippi, focused on what Kennedy saw and what the Delta is now like 50 years later.

But for two people, Kennedy’s tour wasn’t just a historical moment, it was a serendipitous one. Marian Wright was a civil rights activist and also the first African American woman to pass the Mississippi bar and become a lawyer in the state. She helped launch Head Start, an initiative that helps provide financial, educational and health services to low-income families, and through her work got a first-hand view of just how bad poverty was in the deep South. She was the one who encouraged Senator Kennedy to visit the Delta, serving as his tour guide when he came.

Alongside Kennedy on the trip was one of his closest aides, a young lawyer by the name of Peter Edelman. Peter had been tasked with coordinating the trip for his boss, and in the process met Marian.

“I had an image of what a Kennedy assistant would be like, but he turned out to be a nice man,” Wright — now Mrs. Marian Wright Edelman — said of their first encounter.

The couple has been married for 40 years and they have become two of the most prominent advocates in the country campaigning to end poverty. Marian Wright Edelman started the Children’s Defense Fund in 1973, and Peter Edelman went on to work in law and politics, most prominently for President Bill Clinton in the Department of Health and Human Service. Mr. Edelman resigned over Clinton’s passage of the 1996 Personal Responsibility and Work Opportunity Reconciliation Act, known more broadly as welfare reform.

He said we would have twice as many people in poverty today if it weren’t for some of the initiatives that have been put in place in the past 50 years, but it’s still not enough.

“Poverty in Mississippi and in too many parts of our country is as bad or worse,” Mr. Edelman said. “Welfare is basically gone. In many states in our country where we don’t have enough jobs are people whose only income are food stamps.”

He said that’s roughly 7 million Americans: “There’s a huge hole in our safety net in this country.”

Mrs. Wright Edelman agreed that we have made an enormous amount of progress as a nation, but says that while the system has been able to provide more food to hungry families, it has lost ground in other ways.

“The rich are getting richer, we know about the massive wealth and income inequality, and this is a very scary time of regression where we’re seeing a great threat to the quality of education, to the ability of the poor to get help and (get) work,” she said, adding that lawmakers at both the state and federal level have been cutting back on resources for the poor, exacerbating the problem.

Mrs. Wright Edelman said the lines of opportunity in many places are splitting along racial lines, just like in Cleveland.

“Over 80 percent of the black children in Mississippi cannot read or compute at grade level in 4th or 8th grade and the drop-out rates are astronomical,” she said. “What is a child going to do in this globalizing economy if they can’t read or compute at the most basic levels?”

Despite the bleak statistics, Mr. Edelman is hopeful for a bright future.

“As we talk about all of these barriers and all of these difficulties, we have to remember that we’ve done a lot,” he said. “Robert Kennedy went home that night from Cleveland, Mississippi and he told his children they had to do something. And he did something. He started the work that led to having a national food stamps program, which we did not have on that day in Cleveland, Mississippi. And that’s really a story that can inspire us to do more in a lot of different ways.”

Mrs. Wright Edelman said the country is at a crossroads.

“I think that we are teetering on the brink of either moving forward or moving backwards as a nation,” she said. “It’s time for a new movement to address poverty and massive economic and wealth inequality. This is a very real and dangerous point in our country and (it’s time) for citizens to step up, for all of us to step up and say we are not going to tolerate our children and grandchildren having to fight these battles all over again.”