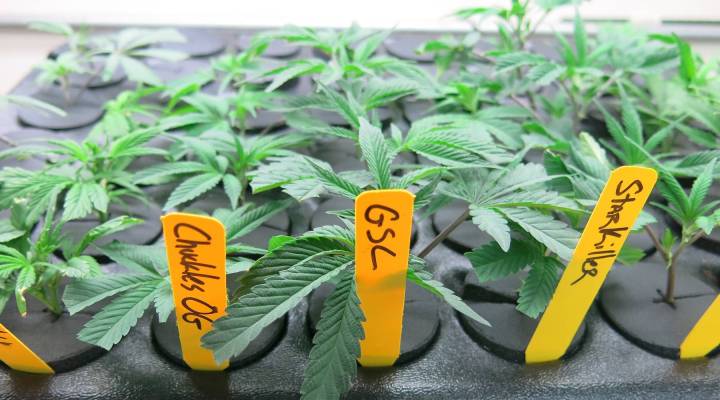 COPY
Well-trained plant breeders can now entertain a new calling: marijuana. Breeding programs, like this one at The Farm in Boulder, Colo., are becoming a significant commercial enterprise. Luke Runyon/ KUNC and Harvest Public Media

Well-trained plant breeders can now entertain a new calling: marijuana. Breeding programs, like this one at The Farm in Boulder, Colo., are becoming a significant commercial enterprise. Luke Runyon/ KUNC and Harvest Public Media
Listen Now

Cannabis is beginning to look a lot like a commodity crop. After spending decades in darkened basements and secreted away on small parcels of land, growers are commercializing once-illegal plant varieties: industrial hemp, recreational marijuana and medical cannabis.

As more states legalize the growth of certain types of cannabis, those in the industry are turning to traditional farmers for help in an effort to transform the plant from black market scourge to the next big American cash crop.

Of course, this transformation would have been impossible without a change in law and a change in tone from regulators. In Colorado, marijuana is enshrined in the state’s constitution, and its regulations and standards are folded into several state agencies. While Gov. John Hickenlooper reluctantly took up the mantle of legalized cannabis, the state’s leaders are beginning to embrace it.

Take for example, the 2016 Governor’s Forum on Agriculture, held in Denver. A typical farm conference, farmers in denim and bolo ties mingle with agriculture professionals and state regulators. The governor himself swings by for a keynote speech. But this year, there was a new addition.

On the agenda was a panel discussion: “Cannabis: An Emerging Crop Of Colorado.” The session included three Colorado-based cannabis company executives, and was moderated by Duane Sinning, director of the state’s industrial hemp program.

More than 150 different varieties of cannabis make up Colorado-based The Farm’s genetic library.

In past years, marijuana growers haven’t been invited to the forum. But this year the state facilitated a “lessons learned” panel with cannabis companies in front of an audience of farmers, tackling everything from how to run a combine over fields of hemp to genetically-engineered marijuana.

“There’s an opportunity where traditional agriculture can help an industry emerge in this state,” Sinning said.

Because cannabis is the state’s newest and flashiest cash crop, there’s a rush on finding the most efficient ways to grow it, to set up a marketing system, and to bring down the cost. This rush sometimes takes the form of innovations in lighting or hydroponic water delivery systems. In other cases growers have had missteps, spraying plants with unapproved pesticides, sparking state-mandated recalls of contaminated marijuana.

Some marijuana companies are realizing that to avoid problems in their grow facilities, former traditional farmers might be their best new employees.

“Farmers understand scale. They understand hardship,” Brooke Gehring said, CEO of LiveGreen Cannabis, a chain of shops in the Denver metro area. “They understand you’re only as good as your last crop.”

Stephen Lipton knows those lessons. He’s the cultivation manager at The Farm, a recreational and medical marijuana operation in Boulder, Colorado. Before growing commercial-scale cannabis, Lipton worked as an organic farmer.

While other marijuana companies are attempting to just keep enough product on the shelves, Lipton oversees two research facilities and a development program for The Farm. In one room, which he dubs the “genetics library,” about 150 different strains of marijuana are planted in small pots.

“Genetics is really the cornerstone of the whole thing,” Lipton said. “Without that you really have nothing.”

Stephen Lipton runs a two facility research and development program for breeding new strains of cannabis for The Farm in Boulder, Colo.

Like a plant breeder attempting to make a sweeter apple or a hardier tomato, he crosses strains in the search of the perfect variety, ready to fold the best performer into the company’s lineup.

“Plant vigor, smell, aroma, taste, anything that you can imagine really. Yield is a big one for sure,” Lipton said.

It’s a tricky balance, Lipton says, attempting to birth a high-yielding variety that still holds on to the attributes customers at the store are asking for. Like most things in agriculture, the genetics program here is built on tradeoffs. Some incredibly potent varieties tend not to yield as much. The high-yielders lack the right aroma. The best-smelling buds are duds on taste.

Genetics is just one factor to a successful farm operation. Most of modern agriculture relies heavily on inputs, like fertilizers and pesticides, to keep plants healthy and productive. But for obvious legal reasons, the Monsantos and John Deeres of the world aren’t currently catering to cannabis growers. That leaves room for startups.

One of those new kids on the block, Colin Bell, decided to use his knowledge of soil microbes to serve the marijuana sector. Bell originally developed a mix of microbes at Colorado State University to sell to vegetable farms. But to get an influx of cash, Bell and his business partners decided to pitch their beneficial bacteria to marijuana growers under the brand name Mammoth P, serving a market sorely in need of tailor-made inputs.

“We hear bigger flowers, we hear denser flowers. And in the end what it translates is to is more yield,” Bell said.

In Colorado alone, marijuana sales were just shy of a billion dollars in 2015. Savvy entrepreneurs in the sector are quick to say that even more markets are coming online. More than 20 states have laws allowing industrial hemp and medical marijuana, and four states, plus Washington D.C., give permission for recreational use of the drug. With a handful of states expected to fully legalize in 2016, everyone wants in on the ground floor.

“It’s a super exciting opportunity from a business perspective, Bell said. “There hasn’t been a new market in many, many years, and there might not be one again in our lifetime.”

That same excitement is on display at the cannabis panel at the Governor’s Forum on Agriculture. Grant Mattive farms potatoes and barley in the state’s parched San Luis Valley. Last season he gave hemp a try. In a region prone to drought, he likes the crop’s ability to withstand dry conditions.

“To be successful and to get this industry really going on its feet, we need to involve farmers a little bit more, rather than just the basement weed growers,” Mattive said.

At first, Mattive was skeptical about jumping onto the bandwagon, into the rush to grow cannabis. Now, he just needs to figure out how to run his combine over it.