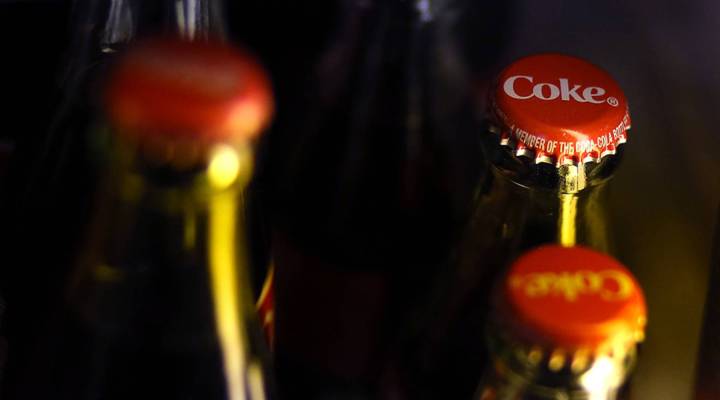 COPY
Bottles of Coca Cola sit in a cooler at a market on April 16, 2013 in San Francisco, California.  Justin Sullivan/Getty Images

Bottles of Coca Cola sit in a cooler at a market on April 16, 2013 in San Francisco, California.  Justin Sullivan/Getty Images
Listen Now

Coca-Cola and cannabis could be coming to a beverage label near you.

Bloomberg TV reports that the Atlanta-based company is in negotiations with Aurora Cannabis, a leading Canadian marijuana distribution and marketing company, to develop drinks infused with cannabidiol—commonly known as CBD. It’s a nonpsychoactive chemical in marijuana that many claim can help treat pain, inflammation, epilepsy, suppressed appetite and other ills.

CBD, as well as THC (the psychoactive chemical in marijuana), can increasingly be found in snacks, sweets, drinks and ointments sold at cannabis stores in states that have legalized medical and recreational use. Several major alcohol companies are already in the development stage to create and market cannabis-infused drinks.

In response to a query seeking comment on the story, Coca-Cola pointed Marketplace to the following statement on its website: “We have no interest in marijuana or cannabis. Along with many others in the beverage industry, we are closely watching the growth of nonpsychoactive CBD as an ingredient in functional wellness beverages around the world. The space is evolving quickly. No decisions have been made at this time.”

Note the phrase “functional wellness beverages.” Peter Lurie, president of the Center for Science in the Public Interest, said that any company attempting to market CBD-infused products to American consumers will have to be  careful about their claims. “One can imagine they’ll be vague and suggestive” about the purported health benefits, Lurie said. “If you make a drug or medical claim, you can expect to have the FDA knocking at your door.”

Lurie said that marijuana research is in its infancy worldwide; until recently, university and pharmaceutical labs in the U.S. were not conducting any research at all. He said the science to date is inadequate to determine whether CBDs and other cannabis derivatives are medically safe and effective.

Brett Cooper, a managing partner and beverage analyst at Consumer Edge Research, said it would not be surprising if Coca-Cola were looking to develop new cutting-edge drinks to boost sales and profits. He said global soft-drink consumption has stalled in the past two decades. “We have a consumer that is more demanding of what they’re getting out of food or beverages.”

Cooper said Coca-Cola is looking at all options: “Something as well-established and known as ready-to-drink iced teas, and products more on the fringe — kombucha or cannabis beverages. Obviously, getting into cannabis is a significant step away from adding vitamins.”

Cooper said that marketing cannabis-infused products could pose reputational risk and turn off some consumers.

Marijuana remains illegal under federal law; it is legal (both medical and recreational) in a growing number of states. CBD itself is in a legal grey zone — it’s unclear whether the Drug Enforcement Administration and federal prosecutors consider it a federally banned controlled substance, like marijuana, or a legal derivative of the hemp plant.

“It is risky — yes,” said cannabis entrepreneur Brendan Kennedy, about the business prospects of developing and marketing CBD-based products in the U.S. Kennedy is CEO of Tilray, a Seattle-based cannabis marketing and investment firm that recently IPOed on Nasdaq. Tilray has extensive production facilities in Canada, where cannabis-related companies can now operate legally at the federal level.

“It’s a $150 billion global opportunity” by 2025, he said. “And in many ways the rest of the world is moving faster than the United States.” Tilray has partnered with  research labs in Europe and Canada, and recently in the U.S., to support medical-marijuana clinical trials. He said the company is focusing on pharmaceutical applications first, so it will have a credible and legally defensible scientific basis for any future business ventures into food and beverage products.

Dr. Stuart Titus, CEO of San Diego-based Medical Marijuana Inc., said his company so far has not ventured into CBD-infused beverages, but he thinks it’s a promising field for research and marketing. “This is fabulous to see,” Titus said. “Coca-Cola is a very mainstream brand, most everyone in the country has used Coca-Cola. Having CBD would raise the overall level of awareness. The more educated consumers we have, the more we believe they’re going to turn to CBD for health and wellness benefits.”