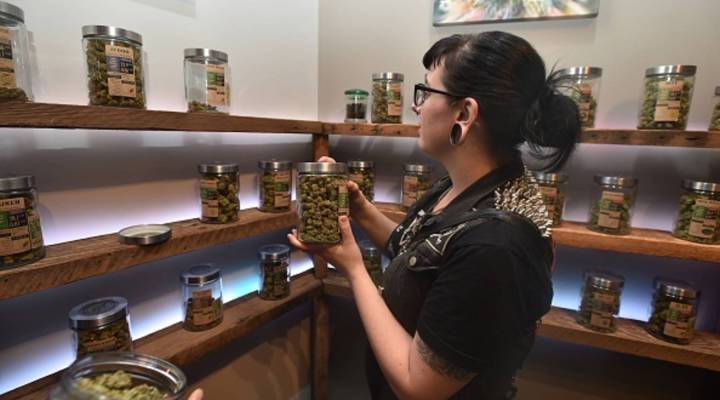 As thousands of people light up to celebrate 420 on Wednesday, entrepreneur Jazmin Hupp will celebrate something else — a business milestone.

Three years ago, at a 420 celebration in Colorado, Hupp decided to leave the tech industry to follow her passion and become a cannabis entrepreneur. Hailing from Ashland, Ore., Hupp is the daughter of a jazz musician and an artist (“hippies,” she said) and grew up in a “cannabis-friendly” environment. To rebel, Hupp decided to move to New York and pursue business opportunities.

“Because I wanted to reject what my parents wanted for me, I became an entrepreneur, I became business-focused, I wanted to get those six figures,” she said.

With marijuana, she’s found a way to combine her roots and her entrepreneurial spirit. A cofounder of the for-profit trade organization WomenGrow, Hupp is focused on helping women enter and thrive in the cannabis business. Founded about a year and a half ago, WomenGrow has about 45 chapters in the U.S. and Canada, and holds events throughout the year that attract about 1,200 women.

The idea of cannabis as a business for women may seem like a tough sell to some, given the industry’s male-dominated public persona — the idea that historically pot smokers, and growers, are mainly men. But, if the vision of entrepreneurs like Hupp prove to be true, women, and their buying power as consumers, are key to cracking the glass ceiling of what will likely become a huge industry, built around a cash crop.

“We control the market,” she said. “I know, for sure, the people who are most apt to take advantage of this marketplace is women themselves.”

While these news reports are recent, women have long played an important role in the cultivation and distribution of marijuana, according to Cal NORML Deputy Director Ellen Komp, who wrote “Tokin’ Women,” a book about famous women who have connections to pot.

From collectives to booth babes

The stereotype of a women in pot is typically one of a submissive employee. In Humboldt County, an area long-known for high-grade marijuana farming, the impression is often that men are in charge.

“When I first moved to Humboldt, it was ‘the men were growing and the women were trimming,’” Komp said. Women growers simply weren’t visible.

“They were quieter about it,” she said. “The women weren’t driving monster trucks around and being very conspicuous about it.”

This may have had to do with women being worried about having their children taken away if they got into any trouble with the law over their farms. Komp said this stigma is changing as female pot entrepreneurs advocate for their parental rights.

Other stereotypes in the industry were of pot grower wives and girlfriends, or female smugglers who were seen as little more than eye candy. And now, as marijuana trade shows increase, booth babes are also more common, Komp said.

It’s a far cry from the humble, hippie beginnings of the pot industry in the 1970s, when growing was largely akin to small farming and represented a desire to live off the grid. And, the impact of female pot advocates is not widely known.

SB 420 was a watershed law for cannabis in California that established the guidelines for growing medical marijuana in 2004. The law was actually inspired by the practices of a collective run by a woman, Valerie Corral,  Komp said.

Corral, who started growing pot to self-medicate injuries she sustained from a car accident, founded the Wo/Men’s Alliance for Medical Marijuana (WAMM), one of the state’s most iconic collectives.

“420 is the first (law) that allowed for these collectives, so patients could band together, grow together and share with each other,” Komp said.

And before Whoopie Goldberg made headlines with her topical treatments, women have been using marijuana to treat ailments for centuries, Komp said. Marketing the substance to women, however, is a new invention.

When Hupp attended that fateful 420 event in 2012, she realized the industry was on the cusp of a boom. Colorado and Washington was about to legalize pot for recreational use, and the industry would need more dispensaries and businesses to accommodate the new demand.

“There’s so much work to do here,” she thought at the time. The marijuana business has since grown by leaps and bounds. Overall, national legal sales grew to $5.7 billion in 2015, up from $1.5 billion in 2013, according to ArcView Market Research, a cannabis market analysis firm. Not surprisingly, this growth comes from rapidly growing adult-use sector, which was essentially created by legalization laws. This market had sales totalling $1.2 billion last year.

The legal market sales will exceed $22 billion by 2020, with adult sales accounting for more than half of the entire legal marijuana industry, the report estimates.

The cannabis industry may hit more legal milestones this year, which could create even more opportunity. More than half a dozen states, including Missouri, Massachusetts and Connecticut, are looking at legalization this year. And more have advocates working on getting legislation on ballots.

“About a third of the country this election will be voting on legalizing marijuana,” Hupp said. “In a way, it’s ‘game over’ — you can’t put the majority of the U.S. back into the bottle once they have access.”

She said this means more opportunity for women to become leaders in the industry. It’s a goal she found difficult to achieve in tech, where the glass ceiling is hard to break, particularly when it came to funding.

“Venture capital, for me, was very uncrackable,” she said, adding that traditional venture capitalists don’t seem to understand of the value of backing women given that they are part of the most influential consumer group in the world. Hupp said the first market women can dominate is the health and wellness sector. In addition to making most health decisions for their families, women are behind 93 percent of over-the-counter medicine, Hupp said. Once again, she sees an opportunity: “What will cannabis be eventually? An over-the-counter medicine.”