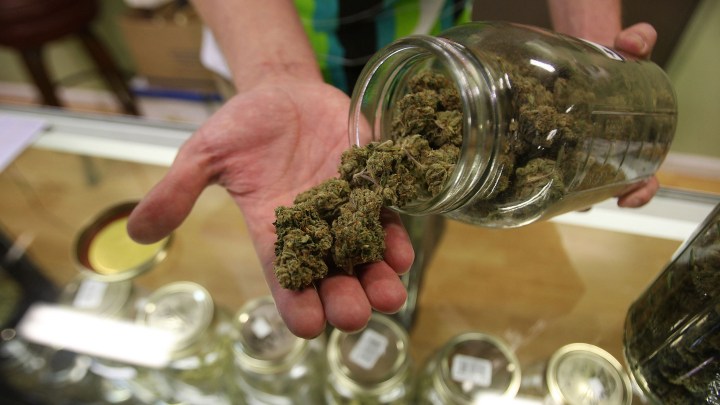 With Democrats in charge of the House, Senate and White House, there’s renewed interest in some type of legislation to legalize the business of cannabis nationwide.

That could make it easier for U.S. pot companies to access banking services, something they don’t have right now.

Take Green Thumb Industries. It is a roughly $8 billion cannabis retailer and dispensary business with more than 50 stores in 12 states.

But, Andy Grossman, head of capital markets at Green Thumb, said the company “can’t use large money-center banks like JPMorgan and Wells Fargo.”

He said that Green Thumb stores use smaller, community banks. National banks stay away because cannabis is still illegal under federal law. Another issue is that without the big banks, marijuana businesses cannot accept credit or debit cards.

Grossman said it has to be an all-cash business, “where you have armored vehicles picking up cash and delivering it to a bank to deposit into the banks.”

Being shut out by major banks also makes leasing space for new stores tough, Grossman said. For example, it’s “hard to find a landlord that doesn’t have a mortgage with Wells Fargo,” he said, “and Wells Fargo says, ‘Not in my building.’ “

Congress is expected to consider a bill that would change all this by legalizing marijuana nationally. Senate Majority Leader Chuck Schumer and two other Senate Democrats issued a statement at the beginning of this month saying they’re committed to “comprehensive cannabis reform legislation.”

Maritza Perez, a lobbyist for the nonprofit Drug Policy Alliance, is pushing hard for complete legalization.

“That’s the bill that we’re going to be throwing our weight behind, but given that it’s very comprehensive and bold, we certainly have our work cut out for us,” Perez said.

That’s because Democrats would need the support of 10 Republicans to advance the bill in the Senate. Edwin Groshans, senior vice president for financial services at Height Capital Markets, puts the odds of a sweeping legalization bill becoming law at less than 33%.

He thinks Congress will go for more piecemeal legislation. There is one proposal that would bar federal regulators from penalizing banks serving marijuana businesses in states where cannabis is legal.

“So if you’re operating in Colorado or Florida, where it’s legal, Bank of America, if they chose to, could serve you,” Groshans said.

That bill, known as the SAFE Banking Act, has better odds. Groshans puts its chances of passage at 60% to 65%.