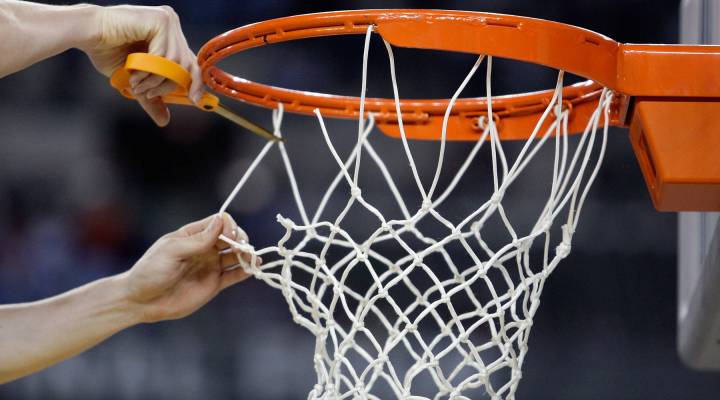 Last year’s 2015 semifinal upset by Wisconsin over Kentucky in the Final Four is the kind of on-the-court drama that makes March Madness a $740 million boon for the NCAA. The organization governs collegiate sports nationwide, and gets the bulk of its operating revenue from March Madness.

The NCAA sells broadcast rights (part of a 14-year $10.8 billion deal with CBS and Turner Broadcasting), as well as endorsement rights. Big Division I schools with powerhouse men’s basketball and football teams can make millions more negotiating their own broadcast and endorsement deals.

Grant said that even as so-called “student athletes” see NCAA and university revenues, as well as coaching salaries, skyrocketing, “they’re not getting their cost of attendance fully covered. And given the work demands for practice and games, they lack the time to pursue the education.”

Player advocates are pursuing a concerted legal and public relations campaign to change the rules of the game. Some players (led by a group at Northwestern) have gone to court to win the right (thwarted thus far by the National Labor Relations Board) to unionize and bargain collectively with schools and the NCAA.

On the table could be everything from: “full cost of attendance” scholarships (including transportation, academic books and supplies, clothing, etc.); to direct compensation of students as employees who earn money for the school by performing on the field or court; to work and safety conditions in college athletics; to extended health benefits to cover sports-related injuries and conditions after leaving college.

Some advocates want to strip the NCAA of its monopoly over rules governing student-player compensation and scholarships altogether, allowing players to negotiate their own individual signing and endorsement deals directly with schools, sporting goods brands, and media companies.

The NCAA says it is planning to send Division I schools at least $200 million more in coming years to boost athlete scholarships, academic support, mental health, and financial literacy.

Ellen Staurowsky, professor of sports management at Drexel University, said the windfall coming from the NCAA to Division I schools will need to be spent carefully and tracked.

“If a women’s program is being starved — not having access to media-relations specialists, marketing expertise, sports medicine, not getting support to hire the best coaches,” Staurowsky said, then it could run afoul of gender-equity guidelines for collegiate sports under Title IX.