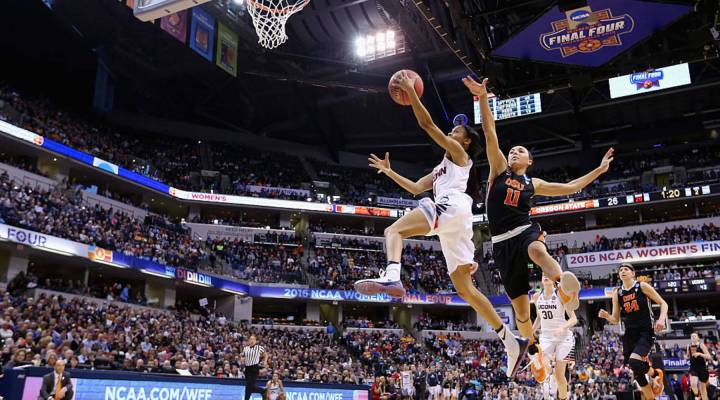 Moriah Jefferson of the Connecticut Huskies shoots against Gabriella Hanson of the Oregon State Beavers in the second quarter during the semifinals of the 2016 NCAA Women's Final Four Basketball Championship at Bankers Life Fieldhouse on April 3, 2016 in Indianapolis, Indiana. Andy Lyons/Getty Images

Moriah Jefferson of the Connecticut Huskies shoots against Gabriella Hanson of the Oregon State Beavers in the second quarter during the semifinals of the 2016 NCAA Women's Final Four Basketball Championship at Bankers Life Fieldhouse on April 3, 2016 in Indianapolis, Indiana. Andy Lyons/Getty Images

For many fans, March Madness is already over. It ended Monday with a thrilling buzzer-beater win for Villanova.

So why aren’t people watching? We called up Whitney Wagoner, director of the Warsaw Sports Marketing Center at the University of Oregon, to talk about it. This conversation has been condensed and edited for clarity.

Let’s start very broad: Why do so many people watch men’s basketball?

I have this conversation a lot. I think in general I would like to have the conversation about any given sport in its own lane, less about how that lane compares to others. If you talk to sports fans they will tell you why they think women’s basketball is less compelling than men’s basketball: There’s not enough scoring, there’s not enough dunking, they don’t run as fast. Those would be some anecdotal things, and the reason that one is more attractive than the other is cultural. That is what that is. We have just these embedded feelings that the women’s version of something is weaker, slower, easier, dumbed down. I think there’s so much social baggage in having these conversations, and then we find ourselves always having the need to try to make it an apples and apples [comparison] when it really isn’t. It should be about, what is the state of women’s basketball?

So just looking at women’s basketball, UConn is heavily favored to win it all. They’re so dominant, at a certain point does that help stoke interest or does it make this tournament boring to watch?

I think excellence is really important, and if you are trying to make people more interested in a sport in any case, having excellence as a product is helpful. So to me, I think it’s really positive that there is an example of very, very high-quality women’s basketball that’s available. So the question is about how do we invest in women’s college basketball everywhere else so the entire tide rises?

The other piece that I think is interesting is the sort of “cart and horse” idea around the media. Not a lot of people are interested in women’s basketball, you don’t really see a lot of women’s basketball in mainstream media. So people aren’t given a chance to consume the product as much, so maybe they’re not interested as much. But the reason they don’t have as many consumption opportunities is because you don’t put it on your air. So that’s a really difficult cycle to break.

So if we discount those socio-cultural reasons, is media attention the main factor here?

It’s not the root, but it’s certainly part of the solution. If you wanted to look at — let’s call them “tier two” sports — one lever to pull to grow interest in your sport is more consumption opportunities. You know the NFL is on Thursday, Sunday and Monday night. The rub of course, is that often doesn’t perform well for the media outlets, so they’re disincentivized to do it.

You need household names, you need superstars. Who is bigger than her sport? You point to a lot of male athletes, and the reason they’re so powerful is not just that they’re a good basketball player, it’s that somehow they’ve become pop culture icons. Those are all solutions to driving interest.

How does that happen?

Steph Curry is a great example. He’s an awesome basketball player right now. He played at a college nobody heard of, he got drafted way deep in the draft, people told him he was too small. People aspire to be Steph Curry and they also find him super-relatable. So culture takes that and goes with it.

I think another interesting angle here is team sport versus individual sports. We could name a lot of women’s tennis players, we could name a couple of famous women’s golfers on the LPGA Tour.

Is it simply harder for some of these players to distinguish themselves off the court?

Maybe the team dynamic doesn’t allow you to do that. Maybe the culture of the locker room says “We are the Minnesota Lynx, we are not Jane Smith and her teammates.” Maybe, I don’t know that for sure.

Young men, men who grew up in Title IX era, men who are dads of daughters. They would all say to you “I would love my daughter to play sports, I think she is a great athlete, I think she should have the opportunity to play professionally.” Mothers say that too, about their daughters. But even those people aren’t turning on the TV to watch the women’s championship game. So the passion is there and the belief in access to opportunity is there. Dads have daughters, and they coach their youth fifth grade girls basketball team, but are those same families going to watch the game? Many of them won’t. So how do we bridge that gap?

Audiences are becoming more fragmented, and some of the pillars of sports media, like ESPN, are really flagging. Does that create an opportunity for women’s basketball to grow?

It might. Maybe it’s worth thinking about the evolution of conference-based networks. I don’t know the data behind this, but one would assume that there are significantly more hours of women’s basketball broadcast now than when it was just the big three and ESPN, and digital is going to be a part of that. Digital media allows us to hyper-focus [and] be highly targeted in our marketing. Digital platforms, streaming platforms, social platforms and digestible content — highlights — maybe that can help drive interest.

It might also help you connect with enough people to make a bracket.

There could be lots of different things, There are fundamental ways of generating interest and telling the story. But if people don’t know that it exists, it doesn’t matter how great the product is because nobody knows where to find it. 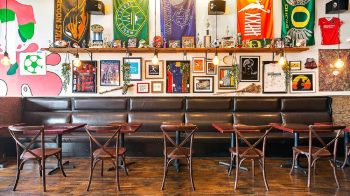 At The Sports Bra in Portland, it’s all women’s sports, all the time