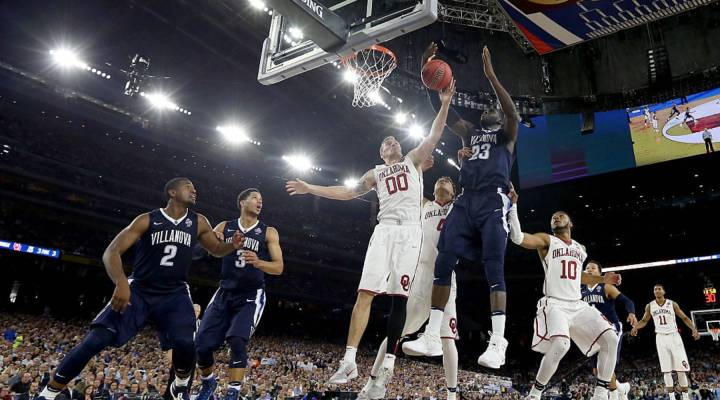 COPY
Ryan Spangler, #00 of the Oklahoma Sooners, and Daniel Ochefu, #23 of the Villanova Wildcats, battle for the ball during the 2016 NCAA Men's Final Four Semifinal in Houston. Streeter Lecka/Getty Images

Ryan Spangler, #00 of the Oklahoma Sooners, and Daniel Ochefu, #23 of the Villanova Wildcats, battle for the ball during the 2016 NCAA Men's Final Four Semifinal in Houston. Streeter Lecka/Getty Images
Listen Now

In workplaces across America, it’s time for March Madness. Sixty-eight men’s college basketball teams will compete for the National Championship, and tens of millions of fans will fill out “brackets” at work predicting which teams will survive each round and make it to the Final Four.

The tournament kicks off March 14 and diehards are already getting their office pools ready, but this nationwide paroxysm of basketball fandom in the workplace is not cost-free.

March Madness is exciting, but it is a productivity bust. Andy Challenger at outplacement firm Challenger, Gray & Christmas said 81 million workers are researching their brackets, watching games in the break room or streaming them on office PCs:

“Ends up costing employers about $2.1 billion paid to employees who are otherwise distracted and not doing their work,” Challenger said. But Challenger warns that employers should do nothing; banning office pools and game watching is guaranteed to kill morale.

Jon Duffy agrees. His advertising firm in Providence, Rhode Island, runs a pool for employees and clients, with a few hundred bucks for the winner.

“Nah, I don’t think it hurts productivity. I think it’s good for culture,” Duffy said. He should know — he’s won the pool a couple of times.