Muslims around the world are celebrating Eid Al Fitr Monday — It follows the month of Ramadan, a holy month in which Muslims fast from sunrise to sunset. For the last week or so, Muslims have been shopping for presents and new outfits for Eid.

Rafi-uddin Shikoh, CEO and Managing Director of consulting firm DinarStandard and lead author of State of the Islamic Economy, puts Muslim spending in the U.S. as high as $124 billion.

But you probably haven’t seen ads calling on American Muslims to spend their holiday money. Shikoh says capitalizing on that spending has not been a priority for marketers, because the American Muslim demographic is not as big as Hispanic, Asian or African American spending blocs.

The lack of attention is suprising, given that when it does happen, it’s a party. A Macy’s in Orange County, for example, put up decorations including ornate towers that stand tall with a message: “Happy Ramadan.”

“If you think about it, it’s just these two bella tower displays in the women’s store, and we had so many people coming in taking pictures with it like it’s a tourist attraction,” says Jomana Siddiqui, the graphic designer hired by Macy’s to create the decorations.

Some people were so excited, they spontaneously started doing a dabke, an Arab line dance.

Siddiqui, who also founded online boutique ModernEid, says it’s not about having others validate your holiday. She says if retailers are smart, they’ll pay more attention to the American Muslim demographic.

“Say you’re looking it from a retail perspective, making your customers happy and making them feel like, ‘Hey, this is a store I want to stay loyal to.’ — That’s what retail is all about,” Siddiqui says. “You want customers to stay loyal to you.”

She says store managers quickly realized the opportunity they stumbled upon.

“I remember this comment stuck out in my head: ‘I’m kind of surprised nobody has done this before.’ It wasn’t a question of ‘should we do this?’ It was a question of ‘why shouldn’t we?’” Siddiqui says.

It’s estimated there are between 2 and 7 million Muslims in the United States. Mennah Ibrahim, with global marketing firm JWT, argues advertisers should spend more money to target Muslims, especially during Ramadan.

And many do — just not here in the States.

“Brands like Chanel here in the Middle East provide longer variations of their outfits; brands like Hermès come in larger sizes so Muslims wear them as headscarves,” Ibrahim says.

Google launched the Ramadan hub and DKNY announced a Ramadan-inspired like called “Head Turners,” but the latter can only be found in the Middle East. The companies simply adjust their brand to the location.

Here in the U.S., though, Ibrahim says the same companies tread more cautiously because they’re still getting to know the American-Muslim consumer. 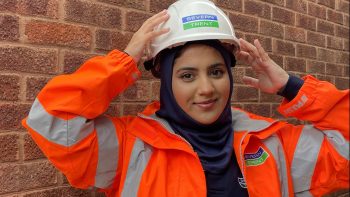