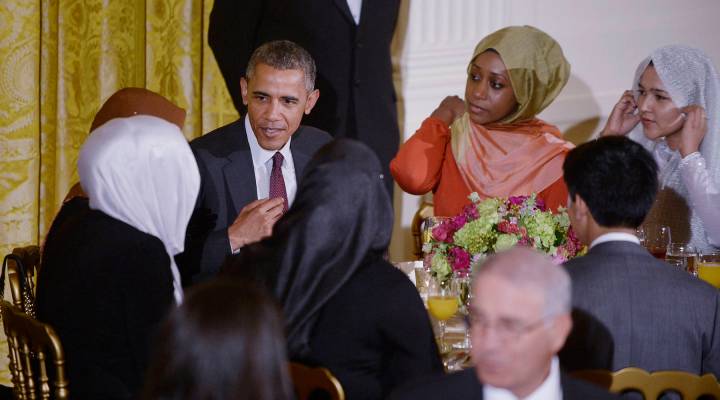 COPY
President Barack Obama hosts the annual Iftar dinner celebrating the Muslim holy month of Ramadan in the East Room of the White House July 22, 2015 in Washington, DC. On Wednesday, President Obama makes the first visit to a U.S. mosque during his administration. Olivier Douliery-Pool/Getty Images

On Wednesday, President Obama makes the first visit to a U.S. mosque during his administration. He’ll hold a round table discussion at the Islamic Society of Baltimore. The trip comes as presidential candidates debate questions about Islam and immigration, a discussion that has often been contentious.

The historic presidential visit provides an opportunity to look at the economic landscape in which American Muslims live. It’s a community that is often stereotyped.

“Either ‘all American Muslims are doctors and engineers and they’re all rich,’” explained Dalia Mogahed, research director at the Institute for Social Policy and Understanding. “Or, the other extreme is, ‘American Muslims bring nothing to the table, that they are a liability in America and a threat.’”

Those broad-brush extremes obscure a deeply complex canvas. Though attention often focuses on immigrants from majority Muslim countries, more than one-third of U.S. Muslims were born here, many of them African-American. And while there certainly are many Muslims in high-paying fields like medicine and technology, there is a substantial low-income population, which grew during the recession.

“The pattern that we saw was that the Muslim population was hit significantly harder” by the economic downturn, said Besheer Mohamed, senior researcher at Pew Research Center, which surveys American Muslims.

The number of low-income Muslims nearly doubled following the recession. But it’s not clear faith is the only explanation. The majority of America’s Muslim population is non-white and the downturn had a disproportionate impact on minorities of all faiths.

Current worries for the community include rising anti-Islamic sentiment. Imagine, for a moment, how a college student with a Muslim-sounding name might feel sending out resumes at a time when a leading presidential candidate talks of banning Muslims.

But despite various challenges old and new, Mohamed says, American Muslims tend to be more optimistic than the average American about their financial futures.