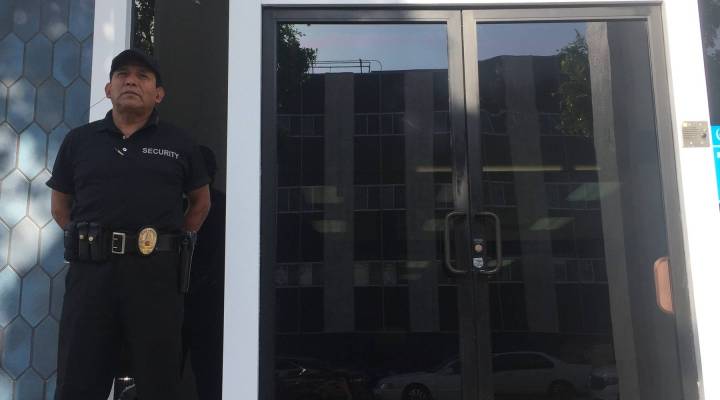 Outside the Islamic Center of Southern California, you can typically spot a security guard standing by the front doors, keeping an eye on those walking in and out of the building. Inside, there are surveillance cameras — a lot of them.

“It feels a bit Orwellian,” Omar Ricci, spokesperson for the Islamic Center, said with chuckle. “But at the same time, it’s something we feel is necessary.”

In total, the center has 32 cameras. That’s in addition to the five security guards brought on after the attacks in Paris and San Bernardino.

All of that protection runs more than $70,000 a year, said Ricci, who first began attending the center as a 6 year old.

“For us and for other mosques around the nation, it’s just the cost of doing business right now,” he said.

Usama Shami, president of the Islamic Community Center of Phoenix, agreed. His center was vandalized about eight times last year, including after presidential candidate Donald Trump called for a ban on Muslims entering the country.

“Somebody broke expensive windows to the office,” he said. “We had people shooting bullets at the mosque.”

Shami said repairs cost the center about $4,000. It also invested $20,000 on 16 security cameras. That’s money that could’ve gone toward Syrian refugees or finishing construction on a women’s bathroom, Shami explained.

Whenever the mosque experiences anti-Muslim incidents, “people are scared to come to the mosque, so donations go down,” he said. “It’s a vicious cycle.”

Shami said enrollment in Sunday school has also dropped by 50 percent over the last year.

Zainab Chaudry, an outreach manager for the Council on American-Islamic Relations, said government money is available for security. Mosques can get up to $75,000 through a Federal Emergency Management Agency grant.

“Unfortunately, because there is a lot of red tape and bureaucracy, it presents an obstacle for mosque leaders often time,” she explained.

Even worse, Chaudry said, many don’t even know the grants exist.