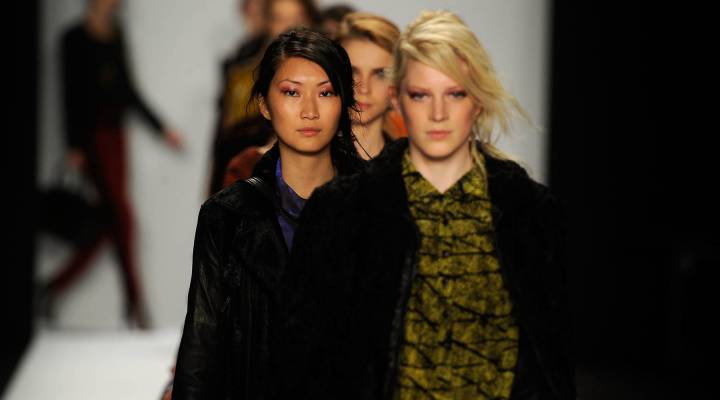 The ups and downs of the fashion world

The ups and downs of the fashion world

That was the refrain at Lincoln Center as Mercedes-Benz Fashion Week got underway on Wednesday. You had to wonder if giant shoulder pads and Hammer pants might be coming back, given that Wu Tang Clan and Bon Jovi are two featured performers.

Anyway, millions of dollars worth of clothing is bought and sold at this annual event. Most of it so expensive that it’s utterly out of reach for, you know, us. But top designers realized some years ago that average consumers were clamoring for a piece of the catwalk.

So while we’re here in New York, we’re taking a look at what they ended up making for us and what you’re paying for up and down the fashion spectrum.

Tim Gunn on “Project Runway”: This must be beautiful, it must be chic.

I am not too proud to admit I’m a fan of TV show “Project Runway.” Not that I’m a fashionista — I work in radio, right?

Gunn: Afterwards we’re going shopping at Mood, where you will have a budget of $100 dollars. You have two days and the winner of this challenge will have immunity.

But I’m fascinated by designers’ ability to take fabric that costs a relatively small amount of money and turn it into this garment that could fetch thousands of dollars on the retail floor. I mean, it’s just fabric.

This is where the magic happens: A giant warehouse in south Los Angeles. You’d never know that inside rows and rows of workers, mostly women, are spinning fabric into figurative gold.

Lindsey Badcock: They are making samples for all the lines that we carry in here. And you can see over there the more delicate fabric, it looks a little bit more like runway items.

Executive assistant Lindsey Badcock was our tour guide at the headquarters of designer Max Azria. Azria’s fashion empire encompasses 21 clothing brands that run the garment gamut. There’s his Herve Leger haute couture that features on the runways this week. There’s his mid-priced BCBG Max Azria brand, and on down to lines he once produced for JCPenney and Wal-Mart. Most of the designs are tested and tweaked here.

Badcock: They all work in here to perfect the one sample and then it gets massively produced once it’s finalized.

Some of the fabrics have intricate designs. There’s beautiful hand-beading on what probably started out as a simple t-shirt.

Simon Collins: You might have someone that’s been cutting patterns for 40 years, who actually did that t-shirt and it happened to fit you better than any t-shirt is ever going to fit you.

Simon Collins is dean of the School of Fashion at Parsons The New School for Design here in New York.

Collins: The way that clothes are marked up, a fabric might be $200 a yard or $500 a yard, you might need anything from two to 20 yards to make a garment. And then you need the hand-sewing. And then once you’ve actually got the garment, well you put a label in it and that label might be the result of many many millions of dollars of advertising each year.

Those variables make a garment expensive enough. Add who’s doing the designing and prices go through the stratosphere. But pricing power lies to a large extent with those designers. And many are choosing to use that power to drive prices down and make their creations available to a wider audience.

Some of Max Azria’s sell for less than a hundred bucks. More and more designers are following the same pattern. And that is how you get lines out the door at Target, as happened last weekend across the country.

Michelle Sanchez: Yes, we found a few items. The famous “Mischievous” bag, one that I was looking in particular for my teenage daughter. You definitely had to be fast.

People across the country queued up last Sunday to get a taste of the designer Jason Wu, who is most famous for dressing First Lady Michelle Obama. He was just the latest high-priced designer to step down and collaborate with a mass market store and the opportunity to own a piece of his clothing was too much for Michelle Sanchez, Donna Nakasaki, Sheila Watt and Diana Mukai to resist at a Target in Rancho Cucamonga, Calif.

Donna Nakasaki: I don’t think anything is really compromised because of the affordability of it. Because I think people go into it knowing, “OK, it’s Jason Wu, granted it is for Target.” So you don’t expect his couture line at Target.

Sheila Watt: Well, it’s not made with the same materials and the same construction quality, so you can tell it’s from Target. It still looks unique enough that it stands out. And you could tell the designer had an influence on it.

Diana Mukai: It lasts and lasts and I’ve had lines that they’ve had from other designers from Libertine. Some of the pieces I still have, even though it’s not the $1,000 pieces, it’s still very good.

Collins: You’re going to go to a party on a Saturday night wearing a Jason Wu dress.

Collins: And spend less than $100 on it or somewhere around that. And that’s a pretty amazing thing.

What’s maybe more amazing is the number of high-end designers that have gone down this road in just the last decade or so. Isaac Mizrahi was the first to partner with Target. Since then, the store has featured Zac Posen, Rodarte, Missoni, Proenza Schouler and Jean Paul Gaultier and Alexander McQueen, among others. At H&M, you could find Jimmy Choo, Lanvin and Versace.

I spoke with Max Azria in his Manhattan offices this week. The way he sees it, you can have a lot of money or a little — but either way, you’re getting something unique.

Max Azria: You have a philosophy on what the season will be.

You have a philosophy on what the season will be, he says. For example, if everything is short, at 12 bucks or $2,000, they have to be short.

Vigeland: So what you’re providing is the trend.

Azria even went so far as to compare clothing at the high and low ends to a McDonald’s hamburger versus a $20 burger at a fancy restaurant. The meat probably isn’t the same or the bread — but it’s all a hamburger.

Nanette Lepore:Why shouldn’t someone be able to have something from a designer that they really admire?

I don’t know, Nanette Lepore… Can’t think of a reason except money? Lepore is jumping on the downmarket bandwagon as well, recently announcing a deal with JCPenney to sell a line geared toward teenagers that will debut in about a year.

We caught up with Lepore in her Manhattan studios as she made final preparations for her fall collection, which shows on Wednesday.

Lepore: Partially, I think people are wanting more designer merchandise because we’re more in tune with fashion. Everyone sees every show, computers are there, you have access to high fashion, so the craving is there.

And pop culture’s obsession with everything fashion-related has done wonders for that demand, from “Ugly Betty” to “Sex in the City” and “Gossip Girl.”

Blair Waldorf “Gossip Girl”: Serena has been so tight-lipped about the preparations. I haven’t a clue what to wear! Should I be ladylike and de la Renta? Avant garde in Alaia? Magnificent in McQueen? What?

But what, exactly, are you getting as the downmarket customer of high-end fashion designers? You’re certainly not getting that hand-beaded t-shirt we saw earlier at Max Azria’s warehouse. Lepore’s JCPenney line won’t use her usual Italian fabrics, and they won’t have the same prints.

Collins: When you’re going for more affordable product, say from Target, you’re certainly getting that designer’s point of view, and for many people, that’s really what they’re after.

Collins: But of course, at that price level you can’t get the attention to detail and the level of workmanship that one would expect from their main line.

So the plain fact is we are getting a cut-rate product. But that doesn’t seem to matter much to us, because we’re getting a taste of high fashion. And longtime fashion commentator Simon Doonan says that is a great development for designers, retailers and consumers. We met up with him outside Lincoln Center.

Simon Doonan: If you’re interested in fashion, which now that is a significant number of people, you’re looking for what’s hot, what’s new, what’s now. Everything about it is a luxurious process, so it’s very expensive. But if you haven’t got the money, you can go to H&M or you can bargain hunt online. There’s so many ways to be stylish and groovy these days without spending a fortune. Though, of course, if you do have lots of money, you could really go to town.

Doonan, by the way, is also a long-time buyer and now ambassador-at-large for Barney’s New York, which this week announced it may have to declare bankruptcy. Perhaps confirming these high-end designers’ impulse to appeal to a not-so-wealthy clientele. Seems like a fair trade. They give us, mere mortals, the opportunity to look good. And in return, we give their bottom line a lift.