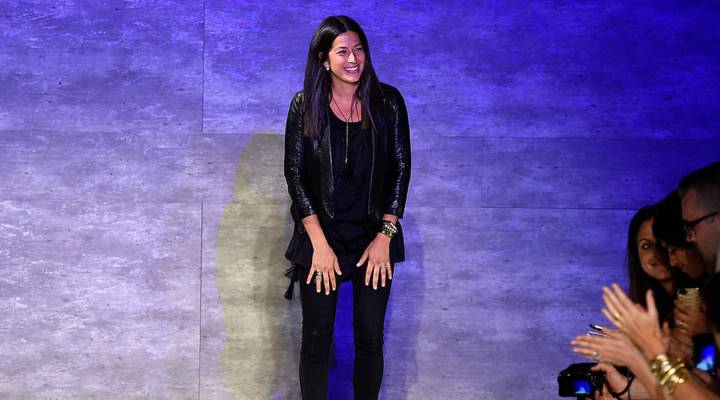 Fashion Week kicks off in New York City today. It’s traditionally a series of runway shows wherein luxury clothing designers show off their next season. This year, it’s taking place in the middle of a lot of uncertainty for retailers across the board. Some designers have already decided to forgo the usual schedule of unveiling clothing that won’t be available for another six months in favor of making designs available immediately.

One designer doing just that is Rebecca Minkoff of her eponymous luxury brand, which she runs with her brother, Uri. The Minkoff’s will show off their line over the weekend. They talked to host Kai Ryssdal about their approach to New York Fashion Week, their strategy to overcome retail’s challenges and what it’s like to work with your sibling (there’s corporate couples counseling involved). What follows is an edited transcript of their conversation.

Kai Ryssdal: I wonder whether — and you guys are the experts — but with Fashion Week upon us, don’t you have better things to do than sit in a radio studio?

Uri Minkoff: We have nothing better than to connect with our customer.

Rebecca Minkoff: The whole goal of this week is leading towards an event that’s all about connectivity with our consumer. And so if we’re going to reach you by radio, then that’s another way to be in touch with her.

Uri: Yeah, we actually were the ones that changed fashion week. So it used to be about showing season ahead to prospective buyers and press. What we celebrate Fashion Week today is actually for the consumer in the season that we’re launching. So this is actually perfect timing for us.

Ryssdal: You guys are jumping way down my list of questions, Uri. But let me ask you about —

Ryssdal: Well no, it’s all right, I’ll go where the interview takes me. As you said, it used to be that, you know, there was a spring show, and you didn’t see those clothes till, you know, six months later, whatever. Now though — and Uri, I guess is what you’re saying — the consumer has changed, right? We want it now.

Uri: Yeah, I mean, we’re seeing it on social media instantly. Fast fashion has entered the supply chain. And so by the time six months later comes, you’ve seen it 10 times, it’s been knocked off nine ways to Sunday. And you’re just kind of bored with it. So we said, “You know what? We’re going to show you something for the first time when it’s ready. And you can buy it, and we’re going to surprise and delight you with what that is. And you better rush to go buy it right now, because it might sell out.”

Ryssdal: You two, Rebecca, have been at this for a while in a partnership. Give me the very quick origin story of how this company got started.

Rebecca: The 30 second version is —

Rebecca: Thank you. Started, had a very small clothing line. Decided on a whim to launch a handbag. DailyCandy, the only social media, kind of, of its day, decided to write about the handbag, named it the Morning After Bag. Saw my first orders sell out of a boutique. Ran out of money. Called my dad, said, “Hey, Dad, I think I’m finally feeling a taste of some success. Will you loan me the money to do the next round?” And he said no, but call your brother.

Rebecca: Yeah, and that’s how it happened.

Uri: And there I entered.

Ryssdal: None of my business, but has it been smooth sibling sailing most of the time?

Uri: For the most part. You know, I think we’ve had, you know, a couple conversations early on with our father where he entered the conversation and said “Now, children, I love you both very much, and we’re going to we’re going to solve this right now.” But one of the things that we started a couple of years ago is the idea of corporate couples counseling. So we actually sit down with someone once or twice a year. We usually spend about two full days doing an offsite together. So it kind of keeps us fresh and grounded and keeps the relationship in a good place.

Ryssdal: You know, that’s interesting, Uri, because you, I mean, you were an entrepreneur, you were a software guy, right?

Uri: Yeah, I had a software company for about 10 years. So I had no expertise in this space, but I think what’s been fascinating is, I’m looking at something as “How would you build this as a software product?” She’s looking at from a fashion designer, and I think we’ve been able to combine those two to have a very unique approach in the world.

Ryssdal: Who’s the competition for you guys, Uri?

Uri: I mean, look, it’s a lifestyle brand, but predominant amount of our business is done in the handbag category. We offer handbags between, you know $200 and $500, so it’s really those other lifestyle brands that are kind of in that space.

Ryssdal: What’s it like out there right now, Rebecca, for higher-end retail like yourselves? I mean, you all did OK during the recession and the financial crisis. How are you doing now?

Rebecca: I think we’re doing pretty good. I mean, I think what we’re witnessing is something I talk about, you know, when the music industry went through its upheaval in 2008, 2009, I think, you know, that conversation is happening in fashion. But I think for us, the key is the tighter the connection we have in our consumer and the more we make traditional brick-and-mortar retail about experiences, can she come away with something other than the product she bought?

Uri: Yeah, I think for us, on the business side, we’re very focused on who we sell to, making sure that we’re at the top-tier partners, making sure that, you know, we’re selling as much full price as we can and really supporting those that do. What’s great is, you know, we have the largest brand in a fashion with a female designer who’s a millennial. And what we’re finding is that customers really responding to Rebecca as a lifestyle brand, so we have huge growth in footwear and in clothing and in other accessories categories. And so we’re very optimistic about the future and Rebecca’s continued relationship with the customer.

Ryssdal: Rebecca, since your brother mentioned it probably half a dozen times in the last 45 seconds, you’re it. You’re the brand.

Rebecca: Well, I never like to look at it that way because I think one could get quite a big head. I think we still very much have an entrepreneurial spirit. So I think it’s always about how can we reach more consumers. How can I tighten the relationship with my customer? How can I inspire to be more fearless, just in life? You know, I think there’s lots of conversations that exist right now about, you know, women entrepreneurs and breaking the glass ceiling. And it never occurred to me when I started off, “I’m a woman designer,” right? I was just a designer. But now I have a duty to inspire more women to reach higher and achieve their goals and really shatter that glass ceiling. So that’s, you know, something else that keeps me grounded and excited.