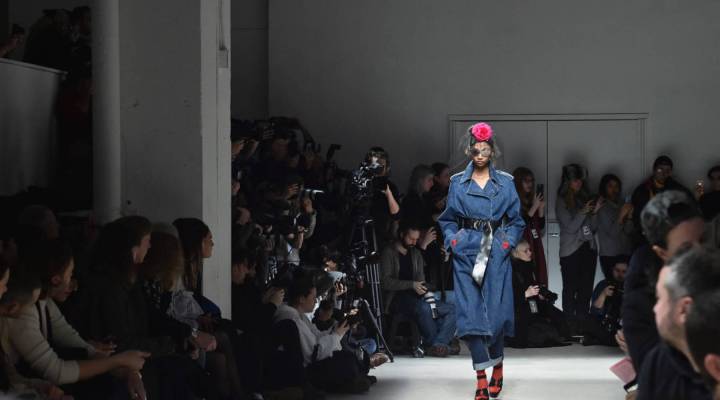 COPY
The runways do matter, Kate Betts says, but there is probably more going on behind the scenes. Mike Coppola/Getty Images

The runways do matter, Kate Betts says, but there is probably more going on behind the scenes. Mike Coppola/Getty Images
Listen Now

New York Fashion Week is in full swing right now, which means it’s go time for the Anna Wintours of the world and at least a of couple of people with the last name Jenner. But like much of the rest of the economy, the fashion industry is changing — and fast.

Kai Ryssdal spoke with fashion journalist Kate Betts, who recently wrote a book titled “My Paris Dream.” Below is an edited transcript of their conversation.

Kai Ryssdal: I’m going to start with a sacrilegious question. Given social media, and all the other ways that designers have to get their message, their word, their vision out, do the runways even matter anymore?

Kate Betts: For some people, they do still matter. There’s a lot of change going on in the fashion business, probably more behind the scenes than actually presenting on the runway. And so there are a lot of brands and designers who do still need the runway to get the message out. Calvin Klein, a huge, $8 billion business, has a brand-new designer that everybody’s excited about — Raf Simons. They need to do a runway show.

Ryssdal: But they still need the social media influencers, right? I mean, you’ve got to get the person with 15 million Instagram followers to get you out there.

Betts: Exactly. And those are the people that are having more and more influence and power in the market. They’re taking over where traditional publishing and advertising left off.

Ryssdal: Let’s get to the corporate side of this thing. You mentioned Raf Simmons at Calvin Klein. The CEO of Ralph Lauren is recently out. There’s shaking up going on in the top ranks of some of the big houses.

Betts: Yeah, a lot of shaking up. We always talk about “When is the old guard going to step aside and the new guard going to take over?” And I think what this boils down to, and what’s really interesting from a market point of view, is that the fashion market now is one market. It is not contemporary versus high end versus, you know, The Gap. So how do you adapt to that? I think it’s interesting that the CEO of Ralph Lauren, who recently left, came from The Gap and H&M.

Ryssdal: But it didn’t do him any good, right?

Betts: Right. I mean, maybe the adaptation is too difficult to make it in one fell swoop like that. You know, they’re big businesses. [It’s an] $8 billion business for Calvin Klein. That’s a big ship to suddenly turn. So it’s going to take a while.

Ryssdal: Let me turn this to a little bit of politics, but mostly business. Were you at all surprised that Nordstrom said it was done with Ivanka Trump, based on product and quality and sales figures?

Betts: Actually, I wasn’t surprised. And I’ll tell you why. I know that most people think it was a political move … but the product wasn’t strong enough. Her sales were down by nearly a third at Nordstrom, and that’s the retail situation these days. If you are down by a third, you’re not going to last at that retail outlet.