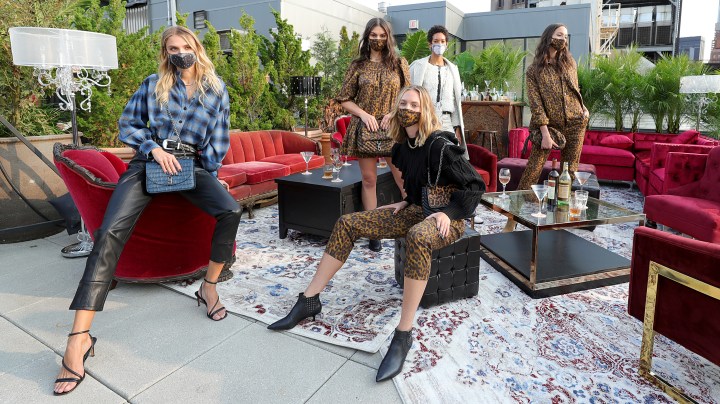 We’re in the middle of fashion week season: New York’s and London’s have wrapped up, Milan’s is going on right now and Paris’ will round out the sequence next week.

The runway shows have been scaled back, socially distanced and mostly virtual. The slimmed-down events are one indication of how the fashion industry’s scrambling to make sense of a world under lockdown.

In the program for his New York Fashion Week event, designer Tom Ford wrote that at the height of stay-at-home orders, he felt fashion should simply go into hibernation for a year. He’s not alone in that thought. Susan Scafidi, founder and academic director at the Fashion Law Institute at Fordham University, said these fashion week shows are “in some ways a placeholder.”

“At the moment, the way we dress is really the way we don’t dress anymore, Scafidi said. “Fewer places to go, fewer formal events, a significant percentage of people still working from home.”

She said that means designers and the companies that distribute clothes have to evolve.

Last week, Rent the Runway, known for leasing workwear and formal wear, said it is getting rid of its unlimited subscription. Retailers that sell high fashion have shuttered. Supply chains have been backed up. Thomai Serdari, luxury marketing professor at New York University, says there’s “a general feeling of uncertainty.”

The products for now on the virtual runway: couture masks, flowier, comfier clothes and home decor. Laticha Brown, a professor at Fashion Institute of Technology, said designers are using this time to rethink what they want to create and what consumers will buy. Brown said her own style has changed now that she spends lots of time on video calls.

“I’m looking at neckline, so am I wearing a crewneck or V-neck,” she said. “I want to make sure perhaps my necklace is a statement necklace something that they can actually see.”

That’s influencing what she and other shoppers have been buying.