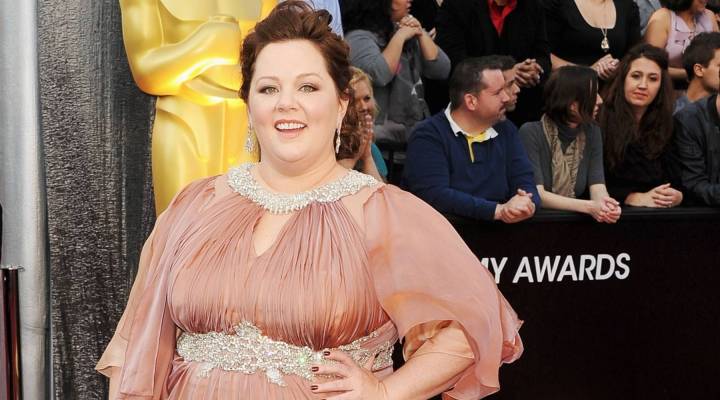 At the upcoming Oscars ceremony, celebrities will make their way down the red carpet in dazzling jewels and glamorous gowns. But behind those immaculate looks, wrangling that dress can be a stressful — especially if you’re a plus-size actress.

The ceremony’s aim may be to honor the industry’s greatest artistic achievements, but Hollywood is still a business after all and there are profits to be made and deals to be struck.

At awards shows, actresses often don’t pay for the fancy dresses they wear — they’re on loan. In exchange, designers get their dresses seen on the red carpet and the name of their brand spoken on television, broadcast to millions.

Whom they’ll loan these dresses to depends, though. Actresses who are either plus-size or just don’t fit into a size 0 or 2 gown have voiced their struggles with finding a designer who will dress them.

Even if you’re an Oscar-nominated actress like Melissa McCarthy, or about to win an Oscar like Octavia Spencer, or on a hit TV show like Christina Hendricks, or starring in one of the highest-grossing movies of all time like Bryce Dallas Howard, getting a dress on loan can be difficult.

The cost of getting ready for the Oscars can add up quickly — the total worth of an actress’ look, including hair, makeup, dress and accessories, can range from the hundreds of thousands to as high as $10 million if they’re A-listers. And there are multiple red carpet events to attend during an awards season, like the Golden Globes and the Screen Actors Guild Awards.

Actress Octavia Spencer wearing a dress from designer Tadashi Shoji at the 2012 Oscars.

To save themselves the headache, some (like Howard) have gone to department stores to buy their gowns.

The definition of what constitutes “plus-size” varies wildly, but the U.S. clothing industry typically considers it a size 14 and above. An estimated 68 percent of American women wear a size 14 or higher, according to Plunkett Research.

“The fashion industry and Hollywood dressing is sizeist. They’re sizeist. And this is the time for us to be pushing ahead in championing the cause of inclusivity in dressing and sizing because it’s an archaic place currently,” said stylist Christina Pacelli, whose clients include actress and LGBTQ advocate Laverne Cox.

How loaning works in Hollywood

Pacelli said that styling actresses who wear clothing that’s plus-size or outside of the sample size range takes a vastly different approach than dressing celebrities who can fit into those sample clothes.

“Most designers and showrooms offer a run of samples that they will allow stylists and editors to pull for shoots and for red carpet fittings. And those are in sample size, so that’s somewhere between a 0, 2, or a 4 depending on the brand,” according to Pacelli. “Creating samples in something larger than what their fit model’s going to wear is a greater endeavor, is a greater investment. So designers simply don’t do it for the most part.”

Pacelli explained that scoring garments larger than those sizes can be a bit like trying to find a needle in a haystack, or a scavenger hunt.

“The universe of options for plus-size celebrities is infinitely smaller than the options available to a woman who is a sample size,” Pacelli said.

If a client has an awards season coming up, she’ll look at designers who would be open to collaborating with them. If they have the resources and the time, she’ll check out designs from their latest collection and start working with them on a custom look for her client.

Designers who are stepping up

Actress Leslie Jones attends the Los Angeles premiere of the 2016 “Ghostbusters” reboot in a dress from designer Christian Siriano.

Cameron Silver, fashion director for the brands H by Halston and H Halston, said he thinks more designers are becoming receptive to dressing women who aren’t sample size, and Pacelli agreed that there’s been some progress (albeit slowly).

In 2016, actress and SNL castmember Leslie Jones said she had trouble getting a designer to dress her for the premiere of the “Ghostbusters” reboot that she starred in.

He later tweeted, “It shouldn’t be exceptional to work with brilliant people just because they’re not sample size.”

Siriano said he ended up selling hundreds of that gown, according to a recent interview with People magazine.

Stylists like Pacelli have also started to work with 11 Honoré, an online retailer that sells luxury clothing for plus-size women.

The company, which launched in 2017, just closed its first-ever runway show a couple of weeks ago during fashion week.

11 Honoré will place orders with designers to create plus-size versions of the dresses in their collections, explained Jessica Raiter, the fashion director and VP of merchandising at the company.

Pacelli borrowed a Christian Siriano dress from 11 Honoré for her client Britney Young, an actress on the Netflix TV show “GLOW,” at an Entertainment Weekly party before this year’s Screen Actors Guild awards.

Raiter said she doesn’t see the future of plus-size fashion as being a “subset” of fashion.

“I just see fashion being fashion, and being inclusive of as many sizes as possible,” she noted.

Marina Rinaldi, a brand of ready-to-wear, plus-size women’s clothing, has also made custom dresses for celebrities, including a gown that Melissa McCarthy wore at the 2012 Oscars. McCarthy told the magazine Redbook that she had asked around five or six designers to make a dress for her, and they all turned her down.

“Women of any size should feel free to express their own personality through how they dress, and … not be limited in their choices,” said Lynne Webber, managing director of Marina Rinaldi.

When designers dress a celebrity, it’s not just about generating direct sales of a specific item, but also about leaving people with a positive impression of the brand.

“On a bigger scale, what we see is that it’s encouraging women to be bolder in their choices. And so we’ve seen a change in women wanting and asking for and demanding more fashionable options,” Webber added.

A moment for plus-size fashion

For some designers and brands, plus-size fashion has been lucrative.

Siriano said adding plus sizes to his line has tripled his business.

“Why wouldn’t you do that?! Do we not want to triple the business? Do we not think these women should wear our clothes?” Siriano told Elle magazine.

Webber said that for the past three years, Marina Rinaldi’s online business has been doubling from one year to the next. The rise of social media has also allowed plus-size women to raise awareness about the issues they face, she added.

Courtesy of The Only Agency

“There is a platform now for plus-size influencers to find their own voice, speak to their community and became well-known,” Webber said. “That has also then driven, I think, more interest on the part of traditional media to also give space to the plus-size community.”

“It makes sense to offer clothing in sizes that represent the majority of the consumer,” Cameron Silver said.

Beyond just the luxury brands, the overall market for plus-size clothing is growing and is valued at $20.4 billion.