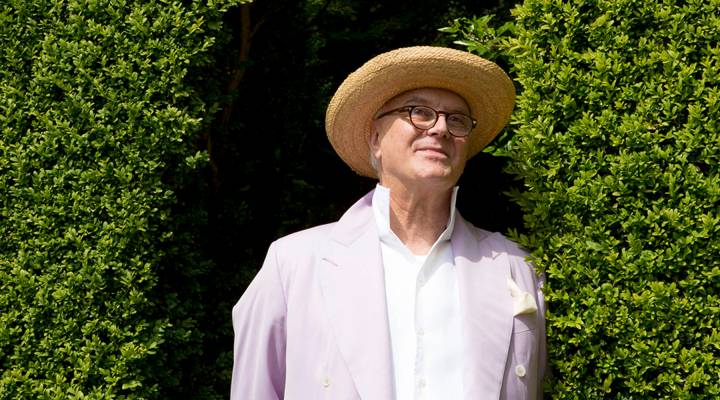 COPY
“The only time I ever really see Manolo truly, truly happy and contented is when he's in the factory sculpting the last of a new shoe or playing with the shape of a new heel,” says Michael Roberts. Above, a picture of Manolo Blahnik. Courtesy of Music Box Films

“The only time I ever really see Manolo truly, truly happy and contented is when he's in the factory sculpting the last of a new shoe or playing with the shape of a new heel,” says Michael Roberts. Above, a picture of Manolo Blahnik. Courtesy of Music Box Films
Listen Now

Before Jimmy Choos or Louboutins helped create a thriving and competitive market for high-end women’s shoes, there were only Manolo Blahniks, created by the Spanish designer of the same name. Manolo Blahnik’s life and interest in everything from art to gardening to his longstanding relationships with designers and other members of the fashion world is the subject of a new documentary called “Manolo: The Boy Who Made Shoes for Lizards.”

Michael Roberts, a British fashion journalist and long time friend of Blahnik, is the director. He talks to Marketplace host Kai Ryssdal about who first convinced Blahnik to focus on shoe design, why the brand caught on so quickly, and how Roberts convinced Blahnik to be a part of the documentary. What follows is an edited transcript of their conversation.

Kai Ryssdal: I should tell you that we were talking about this interview before you and I sat down. My producer and I were and we were talking about how to describe this film that you’ve made about your longtime friend Manolo Blahnik and it occurred to us that it’s basically a coffee table book come to life. What do you think of that?

Michael Roberts: I think that’s pretty accurate. It’s literary, and it’s a sort of wide spread portrait of Manolo, whose interest roam across so many different things.

Ryssdal: Well, if they roam across so many different things — and you definitely get that impression from this film, that he is he is curious about many things — why shoes for him do you think?

Roberts:  Good question. I mean it happened very early on in his career. I remember he used to work in a boutique. One day I went into the shop and he had these sketches behind the cash register. They were shoes but they didn’t look like any that I’d ever seen before. But they were rather sort of intriguing and strange and like him actually. And so, I wasn’t at all surprised that in his next guise he turned up as a shoe designer. He’d been to New York in between, met with the grand Diana Vreeland.

Ryssdal: Diana Vreeland who ran Vogue, we should say.

Roberts: And she said do shoes, do shoes.

Ryssdal: You know there’s a scene in the film toward the end where he goes to the factory where the shoes are made, almost entirely by hand, and he picks up a, I guess it’s a file or something, I don’t know but he gets a wooden model and he actually goes to work on these things. He has some skills in the craft of making shoes. He likes to call himself “cobbler” in fact, doesn’t he?

Roberts: He does. And the only time I ever really see Manolo truly truly happy and contented is when he’s in the factory sculpting the last of a new shoe or playing with the shape of a new heel. He’s completely in heaven when he’s there.

Ryssdal: There is no lack of high-end shoes now. Right. I mean in 1971 when he started it was different but now you got your Jimmy Choos you got your Louboutins. How does he think about differentiating himself, or is he just living the brand now?

Roberts: He feels that he is different. I mean when he started there was no one else doing this kind of thing that he does. Designers only did clothes they didn’t do shoes to go with their clothes. So therefore he was the one who was asked to do all the shoes that went with Calvin Klein or with Isaac Mizrahi. And so, he became very, very famous in a very short space of time.

Ryssdal: Toward the end of the movie somebody, and I apologize, I forget who it is says, Manola basically can’t work with anyone. That he is so particular and so outspoken and so fussy, really, I guess is the word, that he just can’t work with anybody and can’t be bothered.

Roberts: We all say that.