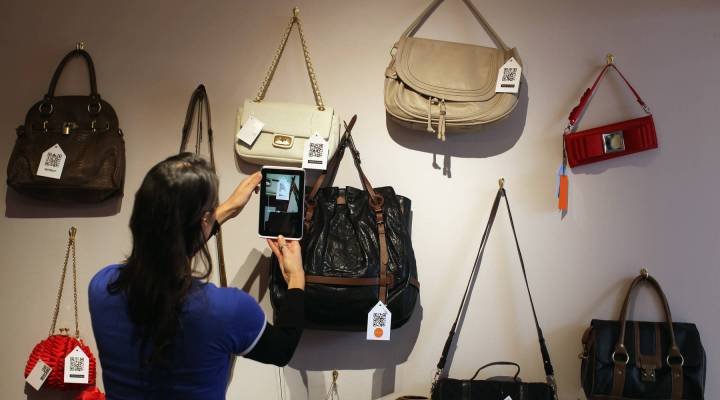 Cashless apps: Shopping without a wallet

New apps are allowing consumers to use their smartphones to shop and not have to carry a dime. Dan Kitwood/Getty Images

Cashless apps: Shopping without a wallet

New apps are allowing consumers to use their smartphones to shop and not have to carry a dime. Dan Kitwood/Getty Images

Kai Ryssdal: We’re live today at The Citadel Shopping Outlets in Commerce, Calif., because, in a lot of ways, as goes our shopping, so goes the American economy.

Our shopping now increasingly is going high-tech with online discounts and daily deals in your email and technology that lets you buy stuff from pretty much anywhere — and in a whole lotta different of ways.

There are actually several products out there that allow you to use your phone to shop and not have to carry a dime. That’s where my colleague Tess Vigeland comes in. She hosts our personal finance show Marketplace Money, and she took some ‘cashless apps’ out for a road test.

Tess Vigeland: So we’re downtown Los Angeles here at 6th and Spring, walking into Sustain Juicery and I feel very strange not having any money on me. I don’t even have a wallet.

Vigeland: Now I’ve never been to this juice bar. But I decided to pay a visit because the store name appeared on an app I was using on my phone called Card Case. It figures out where I am using GPS, then shows me a list of retailers that will let me buy something using the app.

Vigeland: So what do you recommend?

Employee: The Green Monkey’s great for the morning. It’s got lots of fruits and spirulina and kale added to it.

I wanted to see what it was like to make a purchase without handing over any form of payment. Not cash, not a credit card. And so while the — what do I call her, a juice barista? — made my Green Monkey, she typed up my order on an iPad.

Vigeland: OK, now what do I owe you?

Vigeland: And my name is Tess Vigeland. Am I there on your system?

Employee: Yes it is right there, first visit.

She had a picture of me on her iPad from the moment I walked in. Card Case told her I was there. The app is connected to my credit card. All she does is tap on my photo, and my card gets charged $7.50 for the smoothie.

Farhad Manjoo: It is kind of creepy, I mean it feels almost like shoplifting.

Manjoo: You know, you’re used to even the most kind of painless way we’re used to paying for stuff is by handing over a credit card.

Vigeland: Right. I mean, for time and memoriam, even the cavemen I’m sure handed each other something.

Manjoo: Yeah. And now the currency just passes through the Internet and you don’t have to do anything.

There are plenty of other new technologies being developed to separate people from physical payments. Google Wallet lets you just wave your phone in front of a register to pay, but it’s only available on Google phones. Dwolla is the name of another app. Download it, put money into it, and it’s like your personal Western Union — without the fees.

Manjoo: You know, you can see this being useful in a number of instances, you buy something from someone who’s having a yard sale or you’re paying for half of dinner or something like that. It sort of comes up often where we need cash to give a friend money, and here you can just do it on your phone.

I wanted to test Dwolla out, but just like Card Case, not many people use it. And that’s the downside of these technologies: Until more people adopt them, they’re kind of useless. Which is too bad, because while we may not all be using so-called “cashless apps” yet, plenty of us walk around…cashless.

Manjoo: Buying stuff, paying for stuff or trading money with friends — it’s still a little bit frustrating. The goal, I think, with all of these companies is to move society toward this cashless and really frictionless way of spending money, where you don’t think about the money that’s being passed, it just sort of happens.

Vigeland: And of course Kai, that gets to the heart these technologies, which is they just make it even easier to separate us from our money.

Ryssdal: I love that phrase, frictionless.

Ryssdal: Tess Vigeland, host of our personal finance show, Marketplace Money. And we can hear more of that interview with Farhad Manjoo on her show this weekend.