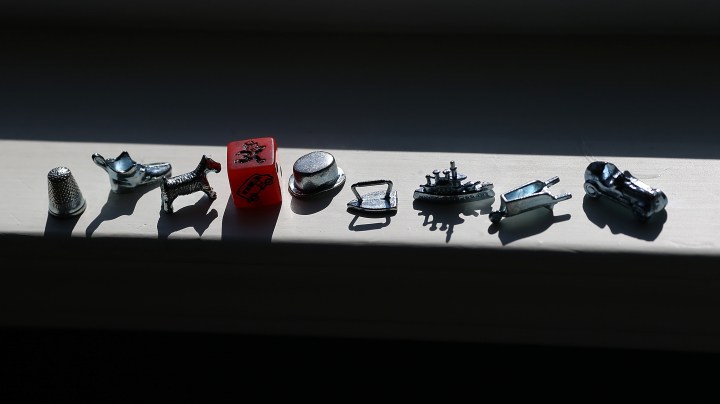 COPY
In this photo illustration, Monopoly board game pieces are displayed on February 6, 2013 in Fairfax, California. Justin Sullivan/Getty Images

In this photo illustration, Monopoly board game pieces are displayed on February 6, 2013 in Fairfax, California. Justin Sullivan/Getty Images
Listen Now

As a kid, Jeromy Shane learned some key financial principles by playing the board game Monopoly.

“A lot about mortgages, a lot about interest and a lot about real wealth. That was very educational. Much more than anything I learned in school, at that time,” he said.

When Shane had children, they played Monopoly, too. His older kids, now in college, used the traditional version: they bought and sold properties, collected rent and paid tax with pastel currency.

By the time Shane’s younger kids learned to play the game, Monopoly had gone cashless. Instead, they used toy ATM cards and a card reader.

“It made it less about understanding, ‘OK, I have this much.’ You know, making change, having cash, setting different piles of cash aside for different budgets and things like that,” Shane said.

The version of Monopoly that’s out today isn’t just cashless — it also has a built-in top hat-shaped voice-recognition computer that acts as the banker. It’s marketed as a way to thwart cheaters.

San Jose State University sociologist Elizabeth Sweet, who studies toys, says without the cash and the human banker, the game loses some of its educational value. She says kids learn from mistakes made while counting out change and they learn how to ask for help.

“Kids will sort of lose that tactile and interactive component of the learning experience,” she said.

At the same time, kids today are growing up in a world that’s increasingly cashless and full of voice activated machines.

Economist Daniel Hamermesh says players may no longer use bills to buy railroads and utilities, but the game still teaches economic concepts like scarcity and how to make decisions about when to invest and when to hold off.

“The pedagogical value should be the same, either way. Because they still know they have a certain amount [of money] that they have access to,” he said.

The new version of Monopoly is an indication of where society’s going, says Richard Gottlieb, a toy industry analyst.

“The toy industry doesn’t just anticipate the future,” he said. “It actually helps shape the future.”

It’s a future in which the value of a dollar is just a number in a computer.