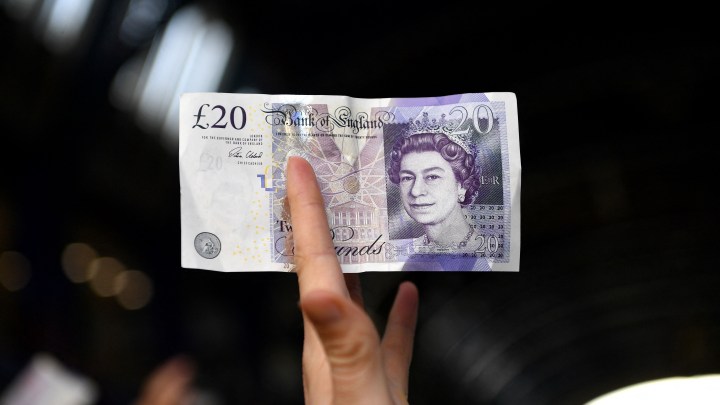 COPY
As many as 8 million Britons are thought to depend on physical money because they don’t have an internet connection, a smartphone or digital skills. Daniel Leal/AFP via Getty Images

As many as 8 million Britons are thought to depend on physical money because they don’t have an internet connection, a smartphone or digital skills. Daniel Leal/AFP via Getty Images
Listen Now

Following the death of Queen Elizabeth II, a new image will begin to appear on banknotes and coins in the United Kingdom in the years ahead. Her eldest son and successor, King Charles III, will at some stage have his profile printed and etched on the national currency. But his image may not be as widely dispersed as that of his mother.

Cash usage in the U.K. has been shrinking fast as banks have been moving more of their operations online, bank branches have been shuttering and consumers have been using cards and smartphones for many more of their transactions.

One report has suggested that Britain is in danger of sleepwalking into a cashless society, while another predicted that could happen as early as 2026.

The flight from cash is great for the banks — they won’t have the costs of handling physical money — and for the U.K. authorities who might find it a bit easier to combat tax evasion, drug dealing and other kinds cash-based criminal activity.

But it’s not so good for the millions of law abiding Brits who still use notes and coins as their primary means of payment. For them, cash is still king.

“We don’t take cash at all,” Emma Kirby, a waitress at a beachfront café in the seaside resort of Brighton said. “We have QR codes on our tables, so people pay through that with their cards online. They can add tips on that. But the tips are definitely not as good as they used to be. Definitely not!”

Hospitality workers seem to prefer a cash tip, since the money goes straight into their pockets. But Kirby said there were “some positives” with the card transactions, because the staff no longer has the hassle of going to the bank with the takings.

Along the Brighton seafront, the stampede away from cash is only too clear. In his tiny booth, even Paul Hughes-Barlow, clairvoyant and palmist, has had to go digital.

“Some days, everyone pays by card. I’ve had a PayPal card reader for a couple of years,” he said. “I think it was COVID that brought it home that you need to use cards, because people worry about germs on cash. Doesn’t bother me, though.”

Hughes-Barlow also accepts cash for his tarot card readings and psychic therapy sessions, and in the privacy of his booth, he confided: He prefers it.

“Oh, God, yes! Cash is fantastic. Stick it under the mattress! I mean, you can actually sit there and count the money to see how much money you’ve made in the day rather than going on an app,” he said.

For some, the retreat from physical money is a more serious matter — a big financial threat. Two miles from the seafront at the Church of the Good Shepherd, the vicar — Father Felix Mascarenhas — said that around half his church’s income comes in cash from the collection plate.

“People like to give a pound here, a pound there or just throw in some coins,” he said. “The congregation here, being an older one, many of them still do have a fear of internet banking or cards. They’re afraid of fraud, which is so very common now.”

Although he’s not convinced that a cashless economy is definitely on its way, it is a potential cause for concern.

“It would be bad for the churches, of course and other institutions that depend particularly on the older generations. Yes, they would be hit hard.”

A substantial slice of the British population could also be badly affected too. As many as 8 million people in Britain are thought to depend in their daily lives on physical money because they don’t have an internet connection, a smartphone or digital skills.

Neil Mason, a musician performing on the street for a living, is pretty handy with a plectrum but not so hot when it comes to a data input device. He is not planning to acquire a card reader.

If Britain does go cashless, he said, he’ll get off the street, do gigs in pubs and clubs and fall back on his other odd jobs as office temp and film extra.

“I’m told I’m a portfolio executive, but without all the technology involved. So I won’t be investing in a card reader, I don’t think.”

In the end he may not have to. In his beachfront booth, clairvoyant Hughes-Barlow peered into his metaphorical crystal ball and declared: “I think cash is here to stay. It won’t disappear entirely. ”

Hughes-Barlow believes that the U.K.’s economic downturn will drive more and more people back to carrying out their transactions in notes and coins, because it’s a better way of budgeting than using digital payments.

”You know what you’re doing with real money, don’t you? You can see where your money goes.”

These are not just the musings of a seaside clairvoyant. An initiative involving the major banks is now underway to improve access to cash in the U.K. and, under pressure over the cost of living crisis, the new government has pledged to defend the right to use notes and coins and to stop the total phase out of physical cash.