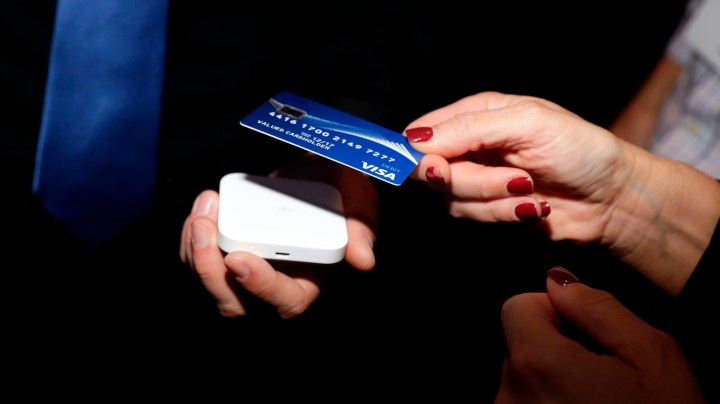 COPY
According to one expert, we were headed towards cashless businesses anyways. The pandemic got us there three years quicker. Isaac Brekken/Getty Images for VISA Inc)
Back to Business

According to one expert, we were headed towards cashless businesses anyways. The pandemic got us there three years quicker. Isaac Brekken/Getty Images for VISA Inc)
Listen Now

Like many eating establishments during the pandemic, the restaurant Dune in Los Angeles’ Atwater Village neighborhood made a lot of changes. Customers can’t enter the building, must order over an intercom and eat at tables outside on the sidewalk. And, they can only pay using digital systems or credit cards.

Simon Phan, Dune’s operations manager, said the cash-free switch was originally based on guidelines from the Centers for Disease Control and Prevention, and it has worked well for his staff.

“We are a very high volume restaurant,” Phan said. “For a customer to be fluffling around with their wallet, maybe some even trying to give you the precise change … if you can just tap your phone, you’re done, you’re out, and we can attend to the next customer.”

“We got to where we are today three years faster than we would have had it not been for COVID-19,” said Shelle Santana, a professor at Bentley University, who researches the cashless economy.

She pointed out that many sports stadiums are going cashless.

At Dune, some customers said they don’t mind the change, especially those who don’t usually carry cash anyway.

“It’s not a problem to me. If it’s something that benefits them, then I’m happy to do it,” said Jason Stomber, as he waited for his order outside Dune.

But there are others who are just not used to throwing down a credit card for small transactions, like a coffee or a falafel.

“It’s our currency and everything being digital and electronic. And being out there constantly using it, I do feel a little bit vulnerable,” said Fern Laurel, another Dune customer.

Meanwhile, cites across the country, from San Francisco to Philadelphia, have passed laws preventing businesses from banning cash, saying such rules are discriminatory. Last year, the New York City Council did the same, though many of the regulations were relaxed during the height of the pandemic.

As for Los Angeles, Mayor Eric Garcetti said the city has taken a different approach: Instead of banning the practice, the city has tried to help small businesses transition to a digital-first model. The program is called LA Optimized, a citywide initiative that helps business owners build their web presence and accept payments online.

“I think the forces predate the pandemic to be contactless and electronic, and we’ve got to make sure that everybody has access to that,” Garcetti said.

She ran her business cash-free for months during the pandemic, but began accepting paper money again recently.  “We still have customers who still want to use it,” she said.

But those cash transactions, she said, make up less than 10% of her business, on a good day.

Correction (May 21, 2021): A previous version of this story misspelled Scott Zwiezen’s name in a photo caption. The text has been corrected.