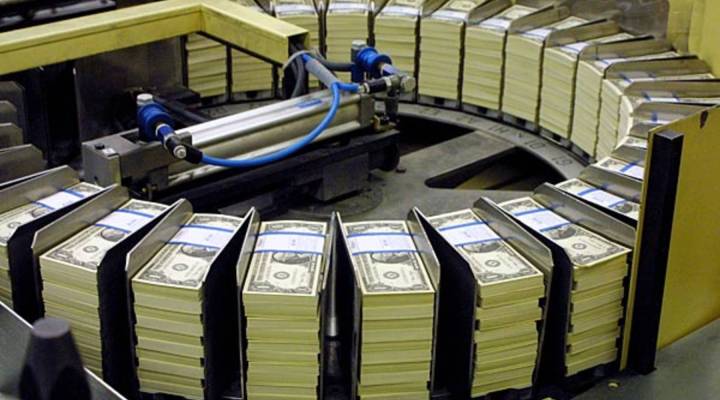 The United Kingdom got a new one pound coin today. The new coin has 12 sides, one hologram and a secret high tech feature that prevents it from being copied, according to the Royal Mint that produces the coins.

Counterfeit currency is nothing new. It’s an issue that has plagued most currencies — from the U.S. dollar to the Mexican peso to the Chinese yuan — forcing governments to consider a more secure design as well as getting rid of some bills altogether. In the world of counterfeit money, the most common culprits are the 20s, be they pounds, dollars, euros or pesos. Here’s a look at how different countries handle counterfeit currency:

In the U.K., counterfeiters have also honed in on the coin market. The Royal Mint estimated that about 2.5 percent of 1.6 billion of 1 pound coins are fake — that means there are millions of pounds in fake coins in cash registers and wallets across the U.K. With counterfeit currency amounting to millions a year, it should come as no surprise that governments are finally looking to secure their currency — even in small denominations.

“In 30 years of minting — and 20 years of mine — there has probably not been any significant change in the way we secure coins. This is a big leap for us,” Gordon Summers, the chief engraver at the Royal Mint, said in an interview with WIRED about the new pound coin.

Alas, Summers would not disclose what the high-security feature of the coin is. He would only say that one needs a machine to detect it.

The United States’ counterfeit problem is mostly limited to its paper bills, with coin counterfeiters mostly focusing on collectible coins. The $20 bill is the most commonly counterfeited banknote in the U.S., while overseas counterfeiters are more likely to make fake $100 bills. The real $100 bills are more prevalent overseas as well, according to the Federal Reserve Bank of San Francisco. Overall, there’s more than $147 million in fake U.S. currency circulating globally these days, CNBC reported in 2015.

The agency tasked with investigating and preventing counterfeiting of U.S. money is the Secret Service. Yup, the agency best known for guarding U.S presidents is the one responsible for protecting the U.S. financial systems. According to its most recent annual report, the Secret Service suppressed 145 counterfeit manufacturing plants, arrested 796 counterfeit criminals and seized $58 million in counterfeit currency in 2015.

Similarly to the U.S., the most commonly counterfeited banknote is the 20 pound note. Last year, 297,000 forged 20 pound bills were removed from circulation.

“In 2016 around 347,000 Bank of England counterfeit banknotes were taken out of circulation with a face value of £7.5 million,” according to the Royal Mint. The counterfeit 20 pound bills made up 85.6 percent of those counterfeits.

In the U.K., the Royal Mint works with the Serious Organised Crime Agency to track down counterfeiters.

It’s not just the dollar and pound that are plagued by counterfeiters. In 2015, about 999,000 euro banknotes were counterfeit. According to European Central Bank, the 20 euro and 50 euro notes are the most counterfeited banknotes. During the last six months of 2015, counterfeit 20 euro bills accounted for 46.2 percent of the counterfeit bills.

A €20 euro is one of the more commonly counterfeited currencies.

If you are traveling to Mexico, you want to make sure that you do not end up with counterfeit pesos. According to Bank of Mexico, about 71 banknotes out of every million are fake.

Rather than deal with counterfeits, India decided to just get rid of the 500 and 1,000 rupee bills last year. The two denominations were commonly replicated by counterfeiters and/or hoarded by workers who did not want to declare their income. By discontinuing those bills, the government is forcing people who might have such bills to take them to the bank and exchange them for other bills.

“This step will strengthen the hands of the common man in the fight against corruption, black money and fake currency,” Prime Minister Narendra Modi said in November.

In response to a Right to Information request filed by Harpreet Singh, the Reserve Bank of India disclosed that the number of counterfeit 100 rupee bills has gone from 68,741 in 2006-2007 to 221,447 in 2015-2016. Singh told the Times of India that he was surprised that 100 rupee notes were also not banned when their counterfeits were almost double the number of fake 1,000 rupee notes.

In 2015, the People’s Bank of China, China’s central bank, unveiled a new 100 yuan bill in an effort to crack down on counterfeits. According to the Wall Street Journal, Chinese police confiscated 532 million yuan, equivalent to $85.6 million, in fake bills in 2014. The most commonly counterfeited notes were 50 yuan and 100 yuan bills.