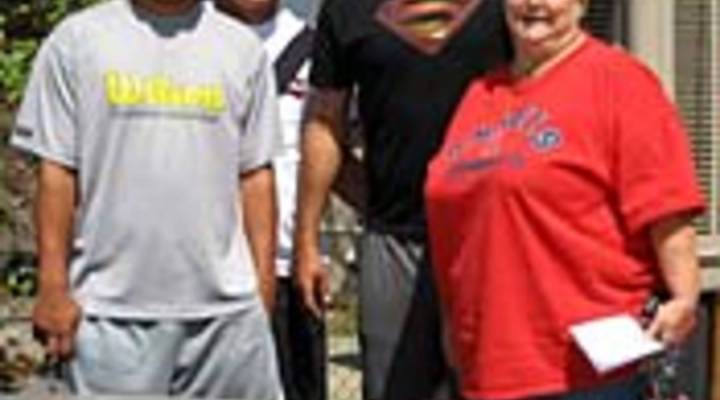 Helping out the home team

Helping out the home team

Kai Ryssdal: Tune in to the baseball All-Star game tonight and you”ll see all the big names. The guys who make all the big money.

But most professional ball players are people you’ve probably never heard of. They spend their careers going up and sometimes down the minor leagues, where the average salary is a thousand dollars a month. So players look for ways to stretch those paychecks with a little help from their friends, as Nancy Farghalli reports.

Nancy Farghalli: Sandy Wakefield is 65. She goes by the name “Mama.” And Mama has house rules: no tobacco, no women and no home cooked meals after midnight.

Sandy Wakefield: You know, it’s your home, and they have to respect that.

Imagine opening your home to a minor league player. Now imagine doing that 50 times over six years. Tough? Yeah. But the players need it.

Wakefield: Rather than them renting an apartment, because in this area apartments run anywhere from $1,200 to $1,800 for a one or two-bedroom, they’ll crowd into one bedroom, and just so they don’t have to pay rent.

The players are from the Rancho Cucamonga Quakes. This season, Sandy is housing three Quakes from Latin America.

Wakefield: They bring home maybe $850 a month. And everybody thinks, “Oh, they make the big bucks.” But they don’t at this level. They have to pay their dues.

So that means living with a host family. The entire Rancho team does it, and the same thing is happening in minor league towns across the country. Families host players who one day may earn more money in a year than the family makes over a lifetime.

Wakefield: With the price of gas this year, I told them, I says I don’t mind driving you around, you know taking you to the gym, taking you to the field. I says but I don’t have the money on my income, with gas over $3 a gallon, to pay for gas. So when we need gas, they all chip in.

So, why open your home and wallet to players who could be gone the next day? Sandy says it keeps her life active. She’s learning Spanish to talk with the players — whom she calls her boys — and she’s always taking care of meals.

Her cell phone rings before she finishes her list. It’s Jose, a Quakes player from another host family who can’t get to gym practice.

Wakefield: Hello? Hi, do you need a ride today?

Only 4 to 5 percent of minor league players will ever make it to the majors. And by making it, I mean playing even for a single day.

That’s according to Pat Doyle, a minor league baseball researcher. He says host families are essential when a player starts out. The minor league salaries are low and the teams give players little time to mature.

Pat Doyle: The only thing that they want to do is to basically develop the best ballplayers, get them through the system and have them in the majors as quickly as possible.

Francisco Rodriguez: We can save a lot of money here. People like Sandy, it’s great for us. Because if we need pay rent in the states like California, it’s really, really expensive. Maybe a lot of players like us, foreigns players, can quit.

Rodriguez gave his $50,000 signing bonus to his dad. He says that living with Sandy has helped, but there’s one thing she can’t afford to help with: the long distance calls. So if her players want to talk to their family overseas, they need calling cards.

And that brings us to this discussion in the car ride to the gym:

Wakefield: Anthony said he wanted a calling card, but we only have 20 minutes to get to the gym and we have to pick up Jose.

The boys say the store might be closed after the game, so Sandy volunteers to pick up the cards herself. Another favor for another group of players who have a new mother in a new home.