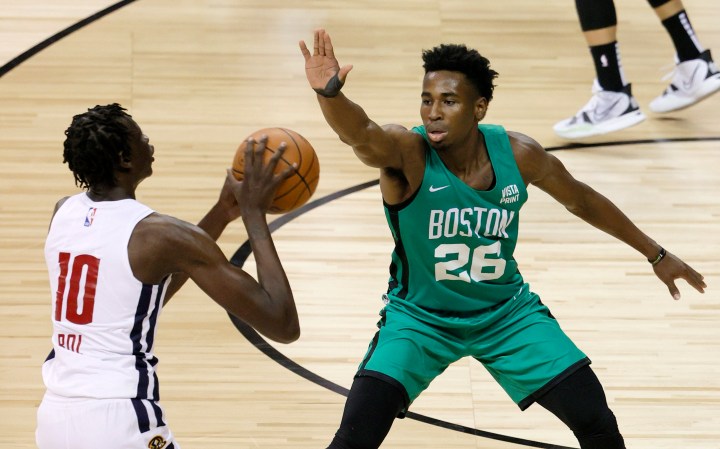 Aaron Nesmith of the Boston Celtics guards Bol Bol of the Denver Nuggets during the 2021 NBA Summer League. The logo of Vistaprint, the Celtics' patch partner, is featured on Nesmith's jersey. Ethan Miller/Getty Images

Aaron Nesmith of the Boston Celtics guards Bol Bol of the Denver Nuggets during the 2021 NBA Summer League. The logo of Vistaprint, the Celtics' patch partner, is featured on Nesmith's jersey. Ethan Miller/Getty Images

Sports viewers are attuned to seeing advertisements in the form of commercials or plastered on courtside signs. But in recent years, sponsorships have become intertwined with NBA players themselves, following athletes up and down the court.

This week, the Los Angeles Lakers revealed that they signed a five-year, $100 million agreement with the South Korean food company Bibigo to feature its logo as a patch on players’ jerseys.

Meanwhile, the Philadelphia 76ers announced a six-year deal with Crypto.com, a platform for buying and selling cryptocurrency.

For decades, jersey sales have been a significant source of revenue for sports franchises. Now, uniforms serve as billboards of sorts —  a form of prime real estate for companies looking to raise their profiles.

The NBA approved a patch-sponsorship program to begin in the 2017-18 season, allowing teams to showcase one client on the front left shoulder of a player’s jersey. The program, originally a three-year pilot, has been extended indefinitely.

Corporate jersey sponsorship had already been adopted by European soccer teams and the Women’s National Basketball Association. In 2009, the WNBA’s Phoenix Mercury replaced its own name with the name of a sponsor, LifeLock, an identity-theft protection company, in a deal worth at least $1 million annually.

The other major leagues let the WNBA serve as a test case, according to Nancy Lough, an education professor at the University of Nevada, Las Vegas, who has expertise in sports marketing.

“In the case of the NBA, the NHL, etc., they’ve been hesitant over the years, thinking that somehow that would diminish their brand or be perceived as selling out,” Lough said.

But she said that perspective has changed dramatically — in part because of the amount of money these leagues would be turning away by ignoring the opportunity. As of 2019, the NBA had generated more than $150 million through the patch program.

“With the NBA doing it, they’re just copying us … good for them,” Penny Taylor, a now-retired WNBA player, said back in 2016.

How are the companies selected?

Many of the companies that have patch deals with NBA teams tend to be less-established players, with several offering financial-technology services.

“For brands breaking into new markets, jersey patches reach a large, attentive consumer market. You’ll notice that most patches are not traditional sponsors,” Kirk Wakefield, a professor of retail marketing at Baylor University, wrote in an email.

Data provider SponsorUnited said more NBA sponsorships are coming from fintech and crypto firms because traditional advertisers, such as banks, have pulled back their marketing spending.

“The senior partnership sales team of NBA clubs solicit brands with interest — sometimes brands might contact the teams or the other way around,” Wakefield explained. “The NBA and each team actively seeks out these partners.”

In Vistaprint’s case, the Boston Celtics had reached out to the company, but talks were put on hold once the COVID-19 pandemic hit, according to Ricky Engelberg, the company’s chief marketing officer.

However, the two did partner for the Celtics’ Food for Heroes program, an initiative aimed at supporting local restaurants and front-line workers.

“That allowed us to see what it’d be like to actually partner with them on community impact,” Engelberg said.

Vistaprint ended up signing a four-year deal with the Celtics ahead of the 2020-21 season after the previous sponsor, General Electric, opted not to renew its contract.

What’s more, these collaborations aren’t limited to the patch. Engelberg said the Celtics share the company’s values and its passion for serving small businesses. “I think that’s what everyone should be trying to look for in these partnerships,” he said.

Vistaprint dedicates courtside signage to small businesses at home games, and the partners have established a $1 million program to distribute grants to Black-owned businesses in New England.

After COVID-19 hit, the NBA relied even more on jersey patch sales to combat the pandemic’s financial impact.

Other leagues, like Major League Baseball, are looking into similar sponsorship programs, while the NHL has approved jersey ads for the 2022-23 season.

It looks like any fear of “selling out” has been quelled.