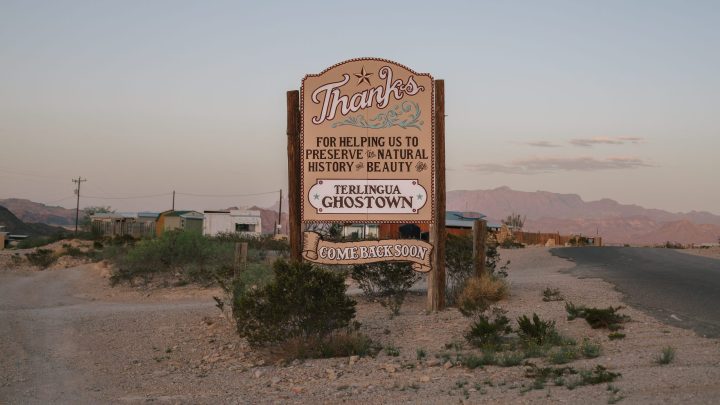 COPY
Some locals in the Big Bend area would like to see the hotel occupancy tax go toward housing assistance or building new roads. Above, the entrance to the Terlingua Ghost Town in the Big Bend region. Hannah Gentiles

Some locals in the Big Bend area would like to see the hotel occupancy tax go toward housing assistance or building new roads. Above, the entrance to the Terlingua Ghost Town in the Big Bend region. Hannah Gentiles
Listen Now

Off a rocky road in the borderland tourist town of Terlingua, Texas, Daryl Eby stands outside his Big Bend Stargazer Airbnb, showing off the renovated vintage Airstream trailer perched on a hillside with sweeping views of the surrounding Chihuahuan Desert.

“This I would classify as glamping,” he said. “From here on the deck, we’ve got a view of Big Bend National Park, the Chisos Mountains, Castolon Peak.”

In the booming tourism industry of the West Texas Big Bend region, frustrations have been growing over a special type of lodging-related tax.

These hotel occupancy taxes aren’t your average tax. In Texas, state law limits how these special taxes can be used. The money mostly has to go back into promoting tourism — with some wiggle room. The taxes can be used for arts programs and historic preservation, but they can’t pay for things like roads or public housing.

That’s got some in West Texas wondering if these special taxes even make sense any more. Because the Big Bend is already seeing record-high tourist numbers, Eby has argued that the tax rate should be lower.

“They’re basically just throwing away money now on extra advertising, much of which is probably not seeing any significant or necessary return on investment,” he said.

Brewster County has a 7% lodging tax rate that gets tacked onto a guest’s short-term rental bill. The county then funnels that money into a local tourism council that runs marketing campaigns. This fiscal year, county records show the tax has already brought in more than $1 million.

Colando said she would like to see the county’s tourism marketing budget “plateau,” then officials could find something else to do with the rest of the money.

Robert Alvarez, who heads up the county tourism council, said he’s on board with that idea. According to Alvarez, the council is already planning to use some of the tax money for things that the law does allow, such as new visitor centers with amenities like public restrooms.

“My organization doesn’t have to keep bringing more and more people,” he said. “We’re at a sustainable level right now.”

Still, what’s “sustainable” here is up for debate.

Skyrocketing tourist numbers have come with the same challenges that other communities face, like a housing shortage as Airbnb numbers grow and strained water supplies as people build new properties.

The state’s hotel industry has largely opposed any broad expansion of lodging tax laws that could allow the money to be used to address those kinds of infrastructure problems, though lawmakers have passed some specific expansions in certain towns.

“The compromise has always been: That’s something the industry will tolerate, provided that the money is used to promote the area as a tourism destination,” said Justin Bragiel with the trade group Texas Hotel & Lodging Association.

“I understand there’s some communities that would say, ‘We don’t want any more visitors or tourists,’” he said. “But you know, that ship has sailed, so to speak.”

Still, Daryl Eby said he thinks that if lawmakers would allow some changes to the tax uses here, there are plenty of things the community could use the money for.

“Grants to help a restaurant owner open up, or to incentivize someone to open a new gas station, or to provide housing assistance for locals,” he said. “There’s a lot of need out here.”

Meanwhile, there’s been a related problem lately with some Big Bend rental owners not paying these special taxes. Officials are gearing up to go after those unpaid taxes, so it’s likely this rural area will have even more tourism-driven cash on hand in the future. But at least for now, it’s also likely that money won’t be used to address some of the region’s most pressing problems.