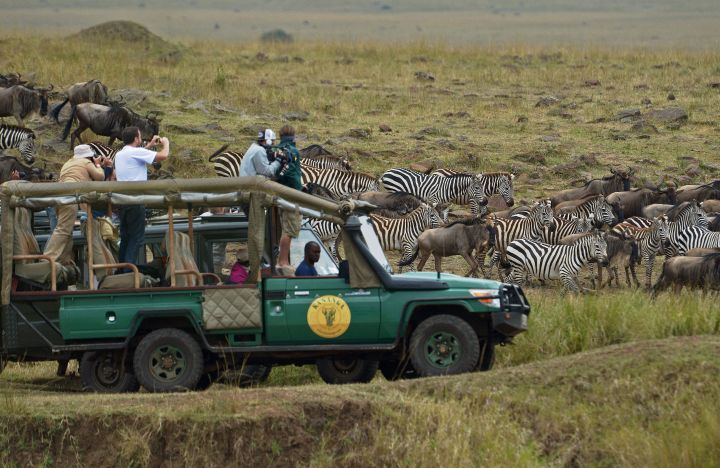 Tourists sit in their vehicles as they watch the wildebeests arriving at a river crossing in Masai Mara, on September 3, 2015. Every year hundreds of thousands of wildebeests make the crossing from the Serengeti to Masai Mara game reserve to graze during the migration. AFP PHOTO/Carl de Souza (Photo credit should read CARL DE SOUZA/AFP via Getty Images)
"The Last Tourist"

Tourists sit in their vehicles as they watch the wildebeests arriving at a river crossing in Masai Mara, on September 3, 2015. Every year hundreds of thousands of wildebeests make the crossing from the Serengeti to Masai Mara game reserve to graze during the migration. AFP PHOTO/Carl de Souza (Photo credit should read CARL DE SOUZA/AFP via Getty Images)

For the month of May, Econ Extra Credit invites you to watch “The Last Tourist,” available to stream for free on Kanopy or to rent or buy on several platforms.

Although tourism can be a great distributor of wealth, it often doesn’t work that way. Rather than ending up in the pockets of the local communities, visitors’ money is often intercepted by foreign companies. Economists have even given this a name: leakage.

The effects of leakage are more pronounced in developing nations. The United Nations estimates that for every $100 spent on a vacation tour by a tourist from a developed country, an average of only $5 stays in the developing-country destination’s economy.

“This is the reality for many emerging tourism destinations in sub-Saharan Africa,” said Judy Kepher-Gona, lead consultant for Sustainable Travel & Tourism Agenda. Kepher-Gona, who has spent two decades promoting responsible and inclusive tourism in Africa, told “Marketplace Morning Report” host David Brancaccio that leakage persists because tourism was never designed to bring in African investors or marketed to African travelers. Recently, however, she has seen a shift toward more inclusive tourism in places like Kenya’s Masai Mara, a popular region for safaris.

“We have seen a surge in local employment for the Masai after the European Union built a local guiding school in Masai Mara to train the Masai to be employed as guides in Masai Mara. This has had a tremendous improvement in the livelihoods of many of the young Masai Maras, who for a long time had watched … other people [tell the] stories of their land,” Kepher-Gona said.

“Now there [are also] direct revenues going to households, thanks to a model of conservation that was introduced in the Mara in the mid-2000s, where the Masai put land aside for tourism and they are paid on a monthly basis, land lease for their land, directly out of tourism revenues.”

For countries that rely on tourism as a sizable part of their gross domestic product, there’s often a tension between the desire for additional tourists and the desire to limit the effects of too many. For cities and countries that struggle with overtourism, the pandemic presented an opportunity for reset.

Barcelona residents aren’t too keen on return to “normal”

Barcelona saw tourism decline by as much as 76% during the pandemic. Now it’s returning to “normal” levels, reigniting familiar tensions between tourists and locals. In response to overtourism, Barcelona has cracked down on illegal rentals and limited tours to a maximum of 15 people.

Venice is capping the numbers of tourists on its streets

Venice is installing electronic turnstiles and requiring day visitors to pay what amounts to a tourist tax. Those visitors will be required to reserve a pass and scan it at various entry points that will help control the number of people on its narrow canals and historic piazzas.

Airbnb makes changes to combat its role in fueling overtourism

Airbnb is now allowing users to search by lodging type, not just destination. If someone wants to rent a cabin by the sea, their search will now show them multiple locations, some of which they might not have thought of for their vacation.

Without tourists, conservation funds struggle to protect land and livelihoods

The collapse of ecotourism during the pandemic spelled disaster for conservation initiatives and livelihoods in Kenya, where government support to protect biodiversity remains low.

Japan’s currency, the yen, is at a two-decade low, which would normally attract an uptick in foreign tourists eager to take advantage of cheaper prices. But Japan hasn’t yet reopened its borders to tourists, exacerbating the economic pain of a cratering currency.