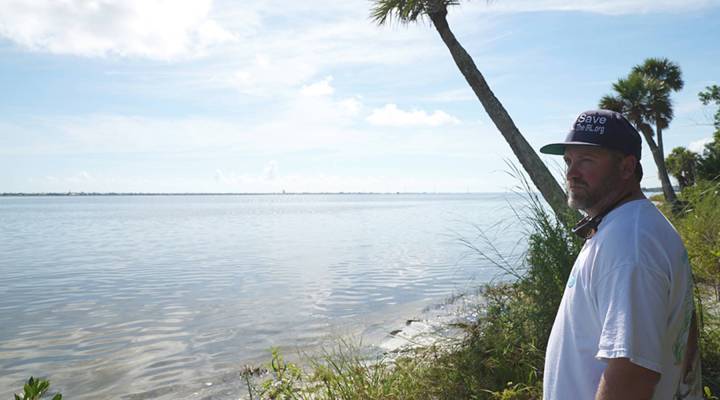 COPY
Stephen Sharkey, who works for the Marine Resources Council, says the Indian River Lagoon had, at one point, the most biodiverse ecosystem in North America. Renata Sago/Marketplace

Stephen Sharkey, who works for the Marine Resources Council, says the Indian River Lagoon had, at one point, the most biodiverse ecosystem in North America. Renata Sago/Marketplace
Listen Now

Stephen Sharkey is Florida grown, as they say. He was born and raised in Brevard County, three hours north of Miami. As a kid in the ’80s, he spent a lot of time exploring the Indian River Lagoon, a coastal inlet that spans five counties and supports thousands of animal and plant species.

“My earliest memories are my dad coming home from work and going to collect blue crab out of the canals,” said Sharkey, standing at the shore of the lagoon.

Today, Sharkey said he is not so optimistic about fishing or eating the crab there. He works at the Marine Resources Council, a nonprofit where he plans events around improving the lagoon’s fish and wildlife resources.

“I haven’t fished since before Irma — Hurricane Irma — came through. The lagoon is in — it’s in a bad state,” he said.

During hurricane season last year, millions of pounds of raw sewage flowed into the lagoon. A 2016 study found the lagoon attracts millions of visitors and generates close to $1.5 billion in spending. But until this year, none of the revenue from the area’s tourism development tax, a percentage tourists pay for every overnight hotel stay, could be spent to clean up the lagoon. State law allows Florida counties to tack on anywhere from 2 to 6 percent for TDT. The money pays for promoting tourism and supporting tourist drivers like convention centers and public museums. Its usage varies from county to county.

“Our tourist development tax money — even though the Indian River Lagoon, even though it’s the No. 1 tourism asset of the county, could not be spent to help the lagoon,” said Randy Fine, a state lawmaker who represents south Brevard County.

Fine authored a bill that passed the legislature this year. Up until this summer, 25 percent of Brevard County’s revenue from TDT, or roughly $4 million dollars, were going to clean up county beaches, but not lagoons, even though they were also a tourist draw.

Bruce Tucker, who runs a riverside restaurant in Melbourne, Florida, called Coastal Crab Company, said the decline of the lagoon has placed a strain on tourist visits and the local economy. The average fish catch has dropped from 200 pounds to 80 pounds, and seafood prices are up.

Bruce Tucker, owner of Coastal Crab Company, holds a blue crab, which has become more difficult to find in the Indian River Lagoon due to sewage dumping.

“Some people are staying away from products coming out of the water, so we have to tap other sources to make sure we stay afloat,” he said.

Under the new law, lagoon cleanup can now be paid for with a portion of Brevard County’s TDT revenue, which amounts to nearly $15 million a year.

It’s promising change for environmental advocates and locals who depend on the lagoon, but the tourism industry is worried the new law will open the door to even more demands on TDT money. Florida visitors spent $112 billion in 2016. Almost 30 percent of that — $32 billion — went to lodging that generated TDT revenue.

“You are taking away dollars that would historically go to the very thing that the tax was designed to do,” she said, adding that the association would like to assess whether this new law is effective after five years.

Tom Knipe, director of economic development for the city of Ithaca, New York, which also has a TDT, said other states and cities have enacted taxes on hotel stays because for the most part they’re not controversial.

“It’s other people’s money,” he said. “People from outside the community pay the room tax.”

But as states and counties become more cash strapped, University of Maryland environmental law professor Robert Percival said we can expect more intense debates over how to use TDT revenue, particularly when it comes to outdoor and natural attractions.

“Nothing turns off a tourist worse than arriving and finding beaches are closed or there are fish kills or sewage in a lagoon,” he said.

Sure, they’ll have already laid out money for their visit, he said. But they might not come back.